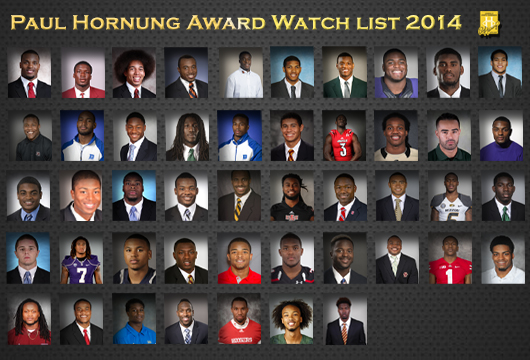 The Paul Hornung Award, now in its fifth season, is given annually to the most versatile player in major college football by the Louisville Sports Commission and football legend and Louisville native Paul Hornung, the Golden Boy.

The 2014 Watch List was compiled by a panel of college football experts based on a combination of 2013 statistics, career performance and expectations heading into the 2014 season. Profiles of each player and information about the Award can be found at www.paulhornungaward.com.

The Paul Hornung Award Watch List includes one finalist from last season, Myles Jack from UCLA. Also, the Watch List contains 22 of the top 100 all-purpose players from 2013 according to yards per game average from ncaa.com, including the top two – Ty Montgomery from Stanford and Jamarcus Nelson from UAB.

The Watch List is comprised of 22 seniors, 12 juniors and 13 sophomores, representing 43 universities and 10 conferences that are part of the NCAA Football Bowl Subdivision (FBS). The ACC and Big Ten are tied as the leading conferences with 10 players followed by the Pac-12 with seven players. There are five players from the Big 12 and four from the SEC on the Watch List.

Hornung is impressed with the skills and attitude of the players on the Watch List. “It’s great that we are able to acknowledge outstanding players who contribute any way possible to help their team win,” Hornung said. “Doing what it takes to win was a trait that I learned early in my athletic career and carried with me to Notre Dame and the Green Bay Packers. I look forward to following the players on our Watch List during the upcoming season. And I enjoy watching many of our winners and finalists from the first four years as they make their marks in the NFL.”

The Louisville Sports Commission successfully launched the Paul Hornung Award in 2010 to honor its namesake and native son and to promote outstanding performances by versatile college football players who often go unnoticed. Owen Marecic of Stanford, a two-way starter and All Pac-10 performer at fullback and linebacker, won the inaugural Paul Hornung Award in 2010; Brandon Boykin of Georgia won the award in 2011 after excelling on defense, offense and special teams; Tavon Austin of West Virginia won the award in 2012 as one of two players in the nation with more than 500 yards in three different categories (rushing, receiving and kick returns); and Odell Beckham Jr. of LSU won the award in 2013 after finishing the season ranked second in the nation and first in the Southeastern Conference with 2,222 all-purpose yards and 185.2 average yards per game.

Texas Roadhouse signed on as presenting sponsor of the Paul Hornung Award in 2011 and will team with the Louisville Sports Commission to power fan voting again this season. College football fans nationwide will have the opportunity to vote for their favorite player during the regular season and again during the bowl season. Fan voting will open in late September and factor into selection of the finalists and winner.

The winner will be honored at the official Paul Hornung Award Banquet sponsored by KentuckyOne Health, held at the Galt House Hotel and Suites in downtown Louisville in late January-2015.

Players from all FBS teams are eligible and appearing on the Paul Hornung Award Watch List is not a prerequisite for winning the Award. The Selection Committee is comprised of 16 national sports journalists and former college and NFL players who vote for finalists then a winner. Their votes are tabulated by public accounting firm Dean Dorton.