by Loren Smith
Georgia graduate and letterman in track and field; long-time member of the University of Georgia Athletic Association.

Versatility has always been a Brandon Boykin hallmark, beginning with the youth leagues when he played all sports – whatever was in season. Like a Renaissance man, he has multiple interests and usually excels at any game or activity with which he becomes attached. At this stage in his life, his goal is not only to become a member of a National Football League team roster, but also to learn, grow and prosper in the play-for-pay league.

Winning the Paul Hornung Award is based on collegiate performance, and Boykin comes to Louisville with an objective that is certainly not original but is not altogether commonplace with college athletes today. He has already begun planning his first off season. While he makes no assumptions, he has confidence that he will succeed on the next level. But, as he pursues a pro career, he is going to take care of some very important unfinished business – a college degree.

“I need to complete three courses,” Boykin says. “One can be taken online and the other two I will find a way to manage until I am a college graduate. That is very important to me.” To understand Boykin, you have to know his parents, Lisa and Al Boykin of Fayetteville, Ga. “A degree,” says Lisa, “is not an option. It is expected.”

It was Al who introduced Boykin to sports when he was four years old. Baseball was Boykin’s first love. He did not take up football until he was nine years old. With his affection for baseball, Boykin resisted football initially, but once he started, the game struck his fancy intensely. Before he knew it, football was a consuming passion that he played with relentless commitment. “I do love the game,” he says.

A journalism major, Boykin has an interest in a broadcasting career. A brief conversation stimulates evidence that he is already ahead with respect to life after football. Owing to his mother’s influence – that of underscoring good eye contact and learning what to say and how to say it – Boykin does not have the disease that permeates the conversation of so many athletes who beat you down with that tired “you know” phrase. His conversations are efficient, succinct, thoughtful and mature. On top of that, he has a face for TV.

As a player who brought Bulldog fans to their feet by making tackles for loss, running reverses, kickoff and punts for touchdowns, Boykin has a low key style – walk softly, but carry a big stick. Just as he wants to make an impact on the football field, he aspires to make an impact in life, reaching out to others and finding time to support charitable causes. He enjoys being a good role model.

Boykin, the player, and his versatility have been well documented by such highlights as being the only player in Southeastern Conference history with three 100-yard plays of any type, finishing his career with four kickoff returns for touchdowns and one punt return for a touchdown. He had a reverse for an offensive touchdown against #5 Boise State in the 2011 opener, and was a tailback, a wide receiver and quarterback in Georgia’s “wild-dog” offensive set – all while earning his keep as one of the SEC’s most accomplished defensive backs. A team player, you could see the bittersweet emotion following Georgia’s loss to #12 Michigan State in the Outback Bowl to end this season and his career. He was named Most Valuable Player – 92-yard punt return for a TD, 13-yard TD pass out of the backfield, forced safety, seven tackles (two for loss) – but quickly noted he would relinquish that honor for a victory in his last collegiate game.

The consummate well-rounded college man, Boykin enjoys art, likes all musical instruments and plays the keyboard. “He was never a discipline problem,” says his mother. “He stayed out of trouble and wanted to make us happy. At every holiday season, he made me a special card, and I still have some of those Mother’s Day cards. Brandon is a very creative person. He likes to draw and is very good at that.”
With an intellectual curiosity, when he was told about the Hornung Award, sponsored by the Louisville Sports Commission, Boykin immediately went to the Internet to learn more about the award and Paul Hornung. Boykin’s father, Al, was in short pants when Hornung was playing for the Green Bay Packers, but that did not matter to Boykin. He wanted to know about the man for whom the award is named. “When I found out what kind of player Mr. Hornung was, I was overwhelmed,” Boykin says.

As he moves on to his next station in life, Brandon takes pause to look back. “I am already missing the campus,” he says. “I miss the relationships with my friends, but am happy I had such a good experience at the University of Georgia. I have no regrets, and I am thankful to the Louisville Sports Commission and Paul Hornung for this award. I appreciate the award for what it means. This honor can only be good for my future.”

Click here to view all photos from the 2012 Paul Hornung Award Banquet. 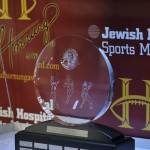 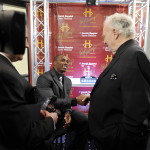 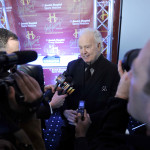 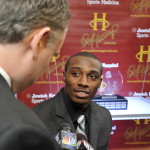 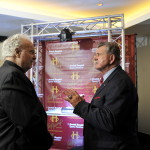 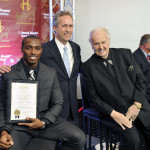 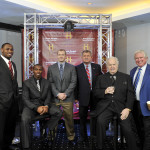 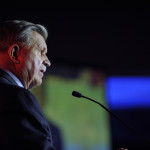 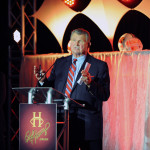 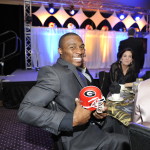 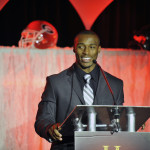 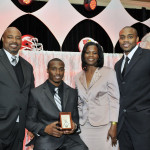 The Louisville Sports Commission and Paul Hornung announced four finalists for the 2011 Paul Hornung Award – Joe Adams of Arkansas, Brandon Boykin of Georgia, LaMichael James of Oregon and Eric Page of Toledo. The finalists were chosen by the 16-member Paul Hornung Award Selection Committee with fan voting on Facebook counting for an additional vote.

“It’s extremely difficult in this day and age for anyone to play multiple positions in college football and consistently perform at a high level,” Paul Hornung said. “The four finalists for the 2011 Paul Hornung Award had fantastic seasons, and I want to congratulate them all for doing whatever their coaches ask to help their team succeed.”

Arkansas senior Joe Adams saw action as a punt returner, wide receiver, and running back in 2011, and was named SEC Special Teams Player of the Year. He led the SEC in punt return yardage and was the only player in the country to return three punts for touchdowns in the 2011 season. Adams caught 49 passes for 630 yards and averaged over 15 yards per carry when his number was called out of the backfield during the regular season. Adams had three punt returns for 62 yards including a 51-yard touchdown, his fourth of the season, one carry for one yard and five receptions for 22 yards in a 26-16 win over Kansas State in the AT&T Cotton Bowl. Adams’ kick return gave Arkansas a 10-0 lead early in the second quarter.

Oregon junior LaMichael James, the nation’s leading rusher, also returned 12 punts for the Ducks on their way to a victory in the first-ever Pac 12 Championship game. James put up astounding numbers during the 2011 season. He had 225 carries for 1,646 yards and 17 touchdowns, caught 17 passes for 210 yards and a touchdown despite missing two games with an elbow injury. He earned All-America selection for the second consecutive year. James earned consensus All-American honors in 2010. He had 25 carries for 159 yards and a touchdown in a 45-38 win over Wisconsin in the Rose Bowl on Jan. 2, 2012, in Pasadena. James also had a 4-yard punt return in the game.

Toledo junior Eric Page made first-team All-Mid American Conference at wide receiver, kickoff returner and punt returner, only the third player in FBS to make first-team all-league at three positions. Page compiled 112 receptions, 1,123 receiving yards and 10 touchdowns, threw a touchdown pass and returned a punt for touchdown. He returned 30 kicks for more than 700 yards and also saw action at quarterback on several trick plays. Page caught 13 passes for 59 yards and had four kickoff returns for 153 yards including an 87-yard return for touchdown in a 42-41 win over Air Force in the Military Bowl on Dec. 28, 2011, in Washington, D.C. Page accounted for 212 of Toledo’s 532 all-purpose yards in the game.