There is no record of how quickly back to back touchdowns have been scored in a major college game by the same player on offense and defense, but it is likely Stanford’s Owen Marecic owns that record — and it might just stand for all time. In a 13-second span against Notre Dame this season, Marecic somersaulted over the scrum to score a touchdown as a fullback, and then intercepted a pass and ran it 20 yards into the endzone for another score as a linebacker. After those two extraordinary plays, he jogged to the sidelines, clutching the ball, and chest-bumped his coach, Jim Harbaugh.

When Harbaugh had approached Marecic his junior year and asked if he would consider playing both ways for the Cardinal, Marecic didn’t hesitate. “It was an exciting challenge to see if I had what it takes to do it, and Coach Harbaugh always was willing to challenge us to do something no one else thought was possible.”

Marecic took that challenge and turned it into an extraordinary season in 2010, including selection as the inaugural Paul Hornung Award winner. He started in all 13 of Stanford’s games, nine on both sides of the ball. He averaged 110 plays per game – equivalent to nearly two full seasons – and was the only two-way starting player among 120 Football Subdivision teams. Stanford finished 12-1, including a win in the Orange Bowl, to complete the best Cardinal season in 70 years. A devastating blocker, Marecic also scored five touchdowns, recorded 51 tackles, including two sacks, and had two interceptions and a fumble recovery. He was named first team Pac 10 fullback and honorable mention all-conference linebacker.

But Marecic’s greatest contribution to the team might have been his quiet leadership. He diligently prepared his body and his mind in the off-season for the duty of playing both ways, spending extra time conditioning, studying film and learning two playbooks. At the same time, he continued to do well academically, maintaining a 3.8 grade point average – highest on the team – in Human Biology.

“He has an exceptional ability to focus on the task at hand, and that is the essence of who he is,” notes his father, Jeff. “The thing that impresses me about Owen is his ability to concentrate on the present, then move onto the next thing, to pour himself into what is important at the time.”

Marecic was born October 4, 1988, and moved with his family to New Jersey, Boston, Los Angeles, and finally Portland, Oregon as the family followed his father’s career as an information technology executive. Owen played soccer, basketball and baseball as a youngster, but football was by far his favorite.

“It was the sport I was best at, and I’ve always really liked the preparation for football — lifting weights and running,” says Marecic. “But it’s also so much fun. It’s the ultimate team sport. There’s nothing like coming together with a group of guys and accomplishing something special.”

At Jesuit High School in Portland, the coach took one look at Marecic, who had always played quarterback, and asked him to move to fullback. He agreed immediately. “He was probably relieved,” says Jeff Marecic. “He doesn’t really like the spotlight, and playing fullback suited him just fine.”

Marecic also played linebacker, and helped Jesuit to state championships as a junior and senior. Stanford recognized his talent and with Harbaugh’s guidance, it turned out to be the perfect place for him to blossom.

“In 30 years of being in college and pro football, I haven’t seen a guy like him,” says Harbaugh. “He has everything – strength, humility, intelligence. He’s the perfect player.”

Marecic’s plan is to attend medical school, somehow fitting it in and around any opportunities he has to play football professionally. Through all of the accomplishments, he remains humble and deeply grateful to those who have helped him along the way. “I wish I could really express how important my family has been in my personal success. They are the most powerful influence in my life, and their inspiration, support, and courage have been my biggest source of strength.”

Click here to view all photos from the 2011 Paul Hornung Award Banquet. 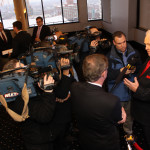 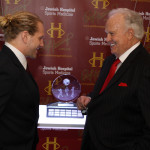 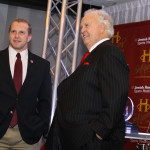 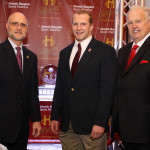 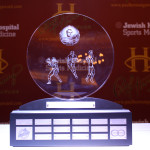 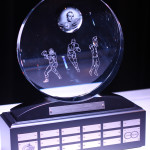 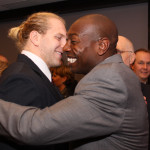 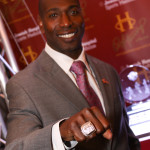 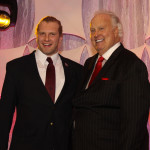 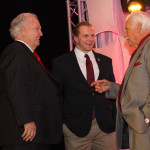 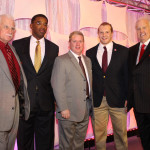 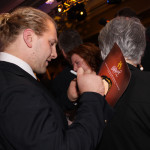 “Each finalist demonstrated his desire to do whatever his coaches asked to help win football games,” said Hornung. “These guys can run, catch, pass, block, play defense or anchor special teams, and they do it in the big games against the best teams. I am a big fan of all three.”

“Electrifying” is how CBS College Football announcer Tim Brando described Kerley, 2010 Mountain West Conference Special Teams Player of the Year. A game changer as a wide receiver, and returning kickoffs and punt returns, he was one of just two players in the nation ranked in the top 20 in both punt and kickoff returns, and helped lead the Horned Frogs to their second consecutive unbeaten regular season. He averaged a career-best 28 yards on kickoff returns, led the team with a career-high 50 receptions, scored 13 touchdowns and led the MWC with 123 all-purpose yards per game. He recorded 114 all-purpose yards in TCU’s 21-19 win over Wisconsin in the Rose Bowl..

Cobb, one of the most prolific offensive and special teams threats in the history of the SEC, accounted for touchdowns during the 2010 season catching, running, throwing, and returning punts – and held for field goals and PATs. After watching UK play, Chris Low of ESPN.com wrote, “there’s not a better all-around football player in America than Cobb.” The Kentucky star led SEC receivers with 79 catches for 955 yards and seven touchdowns. At quarterback, Cobb rushed for 401 yards and five touchdowns and threw for three scores. He also returned a punt for a touchdown, threw and ran for two-point conversions, and set UK’s career record for touchdowns. Cobb was named consensus All-American as the all-purpose player for 2010.