Jeff Brohm does not hold back when talking in glowing terms about Rondale Moore.

Heading into the 2018 season, the second-year Purdue head coach anticipated big things from the freshman wide receiver and return specialist, and knows precisely why he proved prophetic.

“Clearly, Rondale is an unbelievable talent, but his work ethic, attention to detail and desire to be great set him apart,” Brohm says. “He does everything right and represents our program and the university in a first-class fashion. We believed he would be a difference-maker, we put a lot on his plate, and he made an impact on everything.”

College football observed Brohm’s forecast, and Moore wound up as the first true freshman consensus All-American in the country since Oklahoma running back Adrian Peterson in 2004 and the first Big Ten Conference freshman (true or redshirt) so recognized since freshmen became eligible in 1972.

Moore was a first-team All-American as an all-purpose player by the Associated Press and the Football Writers Association of America and a second-team selection as an athlete by the Sporting News. He also garnered All-America honors from CBS Sports, ESPN and Sports Illustrated.

The diminutive Moore stands 5-foot-9 and 175-pounds but is super-strong and lightning-fast. He squatted 600 pounds last summer (becoming a social media sensation) and has been timed in the 40-yard dash in 4.33 seconds. Moore is a humble superstar, preferring to speak about anything but himself.

“I’m probably the most nonchalant guy when it comes to attention,” Moore says. “I don’t get into statistics and all that. I’m just excited to play the game. I try not to get too high or too low and just focus on the next play. I know I can keep getting better and improve on some things.”

Moore became the first non-junior or senior Purdue player to earn first-team All-American honors, the first by any Boilermaker since defensive end Ryan Kerrigan was a unanimous selection in 2010 and the 21st consensus All-American in school history (including the legendary Leroy Keyes twice).

“Everybody is ready to hang up his All-America banner except him,” senior quarterback David Blough says. “He just loves playing football. He loves figuring out what he is supposed to do and then doing it to the best of his ability. His knowledge of the game and the intricacies of playing wide receiver are remarkable for a true freshman. But the best part about him is his humility and unselfishness.”

Even before he arrived on campus, Moore forged a relationship with Blough that evolved into a mentorship and ultimately a friendship.

“David really helped me with the transition from high school to college and what I had to do to learn the offense,” Moore says. “We developed a chemistry early. He is a tremendous role model because of the man he is and how he carries himself.”

A native of New Albany, Indiana, Moore led the nation with 114 receptions, the second-most in a season by a Big Ten player. Chris Daniels of Purdue holds the record with 121 in 1999. Moore topped the conference with 1,258 receiving yards (10th nationally and second in school history) and 12 receiving touchdowns (tied for eighth nationally and tied for fourth in school history) and ranked second with a school-record 2,215 all-purpose yards (fourth nationally) and 14 total touchdowns (tied for eighth in school history). Moore boasted seven 100-yard receiving games, tied for the most in a season in Purdue annals and tied for fifth on the career list.

“Rondale is one of a kind,” junior linebacker Markus Bailey says. “What everybody sees on Saturdays we see every day in practice. He’s so dynamic with crazy ridiculous highlight plays. It’s unbelievable to watch him, and I’m glad he’s on our team. With all that, he has a great work ethic and is very humble. You can’t say enough about him.”

Even more impressive: he achieved a 3.81 grade-point average during the fall semester, the sixth-highest in the program, and aspires to earn his degree in selling and sales management.

Moore earned two major Big Ten honors – the Richter-Howard Receiver of the Year and the Thompson-Randle El Freshman of the Year. He was the first Boilermaker to be recognized as the Big Ten’s best receiver and the fifth to be selected the top freshman. He was named Big Ten Newcomer of the Year by the Associated Press.

Moore earned first-team All-Big Ten honors as a wide receiver by the coaches and media, becoming the first Purdue player at that position so honored since Smith in 2009.

Moore was named first-team return specialist by the coaches and second-team by the media, and he earned Big Ten Freshman of the Week honors four times – following games against Northwestern, no. 23 Boston College, no. 2 Ohio State and Indiana.

In his first collegiate game, Moore set the Purdue game record with 313 all-purpose yards against Northwestern on Aug. 30 – the fifth-most in the country this season. He had 79 rushing yards, 109 receiving yards (the first freshman with 100-plus in his debut) and 125 kickoff return yards.

The previous mark of 312 all-purpose yards was held by Otis Armstrong in his last collegiate game against Indiana on Nov. 25, 1972. Moore amassed his yardage total on merely 18 touches, while Armstrong needed 34.

Moore had a 76-yard rush in the first quarter, the longest by a Purdue player since Akeem Hunt reeled off an 82-yarder at Indiana on Nov. 29, 2014.

The bounty of awards and gaudy numbers have lifted the Boilermakers in their return to eminence under Brohm.

“Rondale put his trust in our program and this university to help him achieve his goals when he had other great opportunities and options,” Brohm says. “When you get a special player like him, it helps you attract more special players. The fact that he had so much success as a true freshman should be a clear indication of the endless possibilities at Purdue. He will continue to have a positive effect on and off the field.” 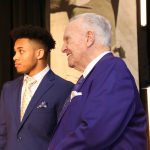 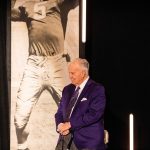 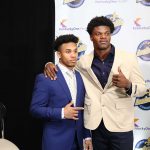 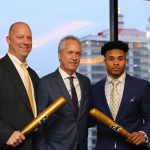 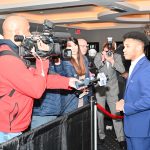 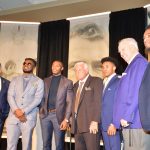 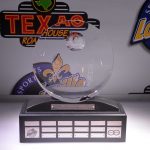 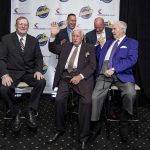 Running Back
Sophomore, Michigan State Spartans (7-5, 5-4 conference)
A workhorse out of the backfield who also lined up at slot receiver, caught and threw passes and returned kickoffs, sophomore Connor Heyward had 163 touches on the season for 1,065 all-purpose yards and five touchdowns and five games of 100+ all-purpose yards. He came on late in the year with his three-best all-purpose outings in the last four games: 208 yards at Maryland, 177 yards at Nebraska and 139 yards against Rutgers. Heyward had a breakout game in a win over Maryland with a kickoff return, a reception and 15 carries for 208 all-purpose yards and two touchdowns, sealing a win with an 80-yard score.
Rushing: 118 attempts, 529 yards, five touchdowns
Receiving: 32 receptions, 249 yards
Kick Return: nine returns, 152 yards, one touchdown
Passing: 13 returns, 287 yards