By Chuck Culpepper
Originally published in The Washington Post on Oct. 29, 2015
Reprinted with permission

PALO ALTO, Calif. — The nation’s latest great running back walks off the Stanford practice field, stops to converse and utters a short sentence in Kinyarwanda. It includes “mzungu,” a word Rwandan children shout affectionately toward white male travelers, and a word that can stay in the ear forever — especially for a 19-year-old determined to stay grounded and well-rounded.

Christian McCaffrey leads major college football in all-purpose yardage playing for the nation’s eighth-ranked team; plays Palchelbel’s “Canon in D” gorgeously on piano, which he taught himself to play with the help of YouTube videos; apparently does spot-on impersonations; and, before he ever reached Stanford from his suburban Denver home, chose to go to Rwanda to help build a school playground.

From that mission, he keeps photos in his room and videos on his phone, but mostly he keeps the inescapable perspective heightened by visiting a country with its shining recovery from the worst of humanity, its genocide museums with shelves of human skulls. “I’ll catch myself complaining about, like, cellphone service, and I’m sitting there like, ‘Wait a second. What am I really doing now?’ ” He said. “You know, I’m complaining about cellphone service, and there’re real problems in the world. Our problems are not real-world problems, you know, a lot of times, and so it’s something that I definitely look back on.”

He stepped off the plane in Rwanda with acute culture shock, and stepped back on it with a sense “so heartwarming and so humbling.” His father, former NFL wide receiver Ed McCaffrey, wrote in an e-mail: “He certainly gained an appreciation for the things in his life such as food, shelter and running water that many people take for granted, but at the same time realized how little one really needs to be happy.”

Amid a budding life hailing from a mind-bogglingly athletic family tree, it fueled Christian’s sense of why he plays football, owing heavily to his Christian faith.

“I think it’s a sin not to use my abilities to the fullest, and part of that is giving all I have on every single play,” he said. But, also: “I play for my teammates. Not that I don’t want to let them down, but that I want to be great for them, because they’ve sacrificed so much.”

Since mid-September he has exploded across fields of the American West, rushing for 115, 206, 156, 243 and 109 yards against Southern California, Oregon State, Arizona, UCLA, Washington. His 259.7 all-purpose yards per game lead the national runnerup in that category by 36. Yet to hear teammates talk, he explodes as a rule.

Ronnie Harris, Stanford’s fifth-year senior cornerback, said: “I see this guy take a rush from the 20-yard line in practice, and he’ll run 80 yards fullspeed, all the way down to the other side of the field.”

Freshman wide receiver Trent Irwin: “I think he’s a perfectionist. I think he makes a little mistake, he remembers that.”

Harris: “He doesn’t say a lot but is always there as a presence; you feel him.”

Backup quarterback Keller Chryst, one of McCaffrey’s two roommates: “I think he has his goals really set forward, and he knows what he’s going to do, every single day.”

He does sleep. “As soon as possible, as soon as the homework’s done, he shuts it off, makes sure everyone has got their stuff shut off,” Chryst said. McCaffrey introduced a set of convenient “clapper” lights, reportedly hung around their place. As an aside, Chryst said: “He’s got this wax candle that he really likes, has a good scent. He loves that one. We can, like, change the scent, so we put in, like, maplebrown sugar, the last one, took a risk on that one. Bad choice. Ended up smelling like maple, all our clothes smelled like maple.”

David Shaw, Stanford’s head coach and Ed McCaffrey’s former teammate, said: “It starts with mentality, to where he’s a pusher. He goes hard, all the time. He doesn’t back off. He doesn’t give 50 percent. He doesn’t get tired. He has success and it only makes him want it more. You know, here’s a guy that’s carried the ball a lot and has every right to say, ‘Coach, I don’t feel great today.’ But every time he touches the ball in practice, he runs 50 yards. . . .

“And then you’ve got the skill set: He’s quick, fast, he’s explosive, strong, you know, has all those things combined, and versatile. He can catch. He can run. He can run between the tackles. He can run outside. He can block. So he’s just one of those guys that when you’re building a football player, he has all the things that you’re looking for.”

As a courtesy, this second of four McCaffrey sons gave athletic snapshots of his relatives. Aunt Monica (basketball, Georgetown): “Tall, aggressive, and just a great all-around basketball player.” Aunt Sherrie (tennis, Virginia): “Still runs, does so much even today, even how old she is. Naw, she’s not that old, but she’s still an unbelievable athlete today.” His mother, Lisa (soccer, Stanford): “Probably the best athlete in the family. I have to say that. But she’s super-fast, very, very quick and aggressive.”

Uncle Billy (basketball, Vanderbilt, 1993 Southeastern Conference player of the year): “I think his play speaks for itself.” Uncle Scott (football and wrestling, Duke): “Just a tough, mean guy who — not mean in person, but just a tough athlete.” Uncle Mike (basketball, Husson University): “He could shoot the lights out of the ball. Tall, big frame. Super-funny guy. One of my favorite uncles.” Older brother, Max (football wide receiver, Duke): “Taller, lankier, but extremely fast and has great hands, runs crisp routes, great at blocking and tough older brother to grow up with.”

Two generations up the tree, there’s the maternal grandfather, Dave Sime. He won the Olympic silver medal in the 100 meters at the 1960 Summer Olympics in Rome.

From that human construct comes an athlete who neither buckled beneath it nor luxuriated within it, a player with a motor good for rushes, receptions and returns, a 6-foot, 201-pound sophomore who looks smallish amid the giants on the field but formidable up close. He’s also a student who’ll stop to play hotel pianos on road trips, a 19-year-old with a thousand hopes including a return to a country nine time zones from this well-tended practice field, and a man going places even as he’s already been places. 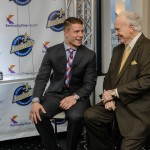 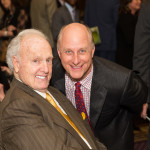 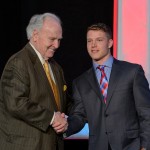 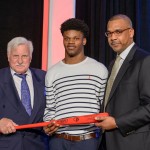 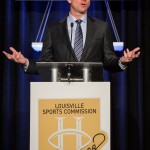 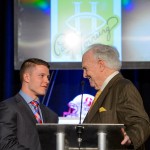 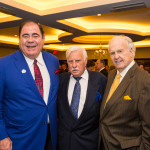 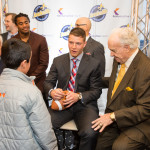 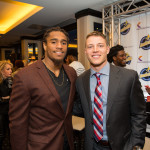 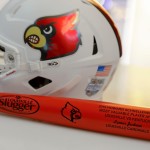 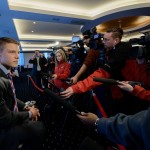 Three of the finalists who primarily played defense – Jackson, Peppers and Nkemdiche – have combined to play every position on that side of the ball except defensive end. All four finalists combined have played every position in the offensive backfield and every receiver position, with McCaffrey playing every spot except tight end. McCaffrey, Peppers and Jackson also returned punts and kicks.

USC defensive back, wide receiver and return specialist, Adoree’ Jackson played defense, special teams and offense and was the only player nationally in 2015 to generate at least 400 yards receiving, 600 yards in kickoff returns, 250 yards in punt returns and 30 tackles. On defense, he had 35 tackles, one forced fumble, eight PBUs, nine pass deflections and one interception, and led the Trojans with 251 punt return yards and 690 kickoff return yards. Using his blazing speed and uncanny cutback ability with the ball, Jackson scored five touchdowns this season – two each receiving and punt returns, and one interception return. In the win over UCLA to decide the Pac-12 South champion, he had six tackles, two pass deflections, 53 yards on kickoff returns and a 42-yard punt return for a touchdown. Jackson earned first team All-Pac-12 honors at defensive back and second team honors as the return specialist.

The first-ever defensive lineman to be named a Paul Hornung Award finalist, Robert Nkemdiche from Ole Miss played a major role disrupting opponents’ backfields from his D-line spots, and made an impact on offense and special teams as the Rebels defeated Alabama, LSU and Mississippi State for the first ever in the same season. In the win over arch rival Mississippi State in the Egg Bowl, he recorded 1.5 sacks for a loss of 12 yards as the Rebels’ defense dominated the game. A tremendous athlete who was considered a highly sought after NFL draft choice, Nkemdiche played defensive tackle, defensive end, H-back/tight end and protector on punts. He recorded 29 tackles, three sacks, seven tackles for loss, scored three touchdowns on offense (two rushing and one receiving) and blocked a kick as Ole Miss finished the regular season 9-3 earning a trip to the Sugar Bowl.

For his versatility on defense, offense and special teams, Jabrill Peppers was called “the Willie Mays of college football” by Michigan Head Coach Jim Harbaugh and was a huge part of the Wolverines’ amazing, turnaround season under the rookie coach. Peppers started every game at safety, saw playing time at three other defensive positions, returned kicks and punts, and during the second half of the season played offense as well. He was named Big Ten Freshman of the Year, first team all-conference and second team Sports Illustrated All-America at safety and honorable mention Sports Illustrated All-America at all-purpose player. Peppers finished the Wolverines’ 9-3 regular season with 45 tackles and 10 pass breakups, while returning 17 punts for an 11.4 average and eight kickoffs for a 27.9 average, rushed for 72 yards and two touchdowns, and made eight catches for 79 yards.