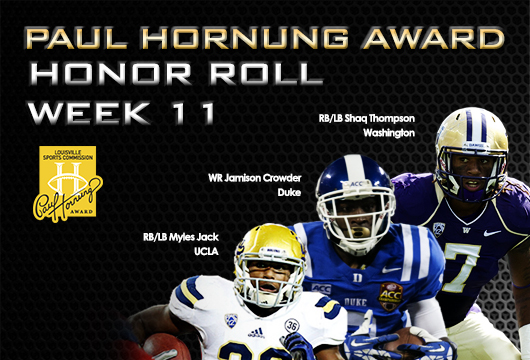 Louisville, KY – Monday, November 10, 2014 – A pair of two-way players and a standout wide receiver / special teams performer earned the Paul Hornung Award Honor Roll for Week Eleven of the college football season The term ‘runnningbacker’ was coined in Twitter-land for defensive stalwarts Myles Jack of UCLA and Shaq Thompson of Washington because they both also play in the offensive backfield. The duo prominently figured as two-way players in the Pac-12 showdown in Seattle on Saturday when Thompson tackled Jack on his first carry from scrimmage in the Bruin’s 44-30 win over the Huskies. Meanwhile, on the East Coast, wide receiver Jamison Crowder scored the winning TD on special teams to lead Duke over Syracuse as the Blue Devils stayed atop the ACC Coastal Division with an overall record of 8-1 and 4-1 in conference play.

The announcement was made by the Louisville Sports Commission, owners and operators of the Paul Hornung Award, presented by Texas Roadhouse and given annually to the most versatile player in major college football. The winner and his family will be honored on January 27, 2015, at a banquet presented by KentuckyOne Health at the Galt House Hotel and Suites in downtown Louisville.

Duke wide receiver Jamison Crowder earned the Paul Hornung Award Honor Roll for the first time this year, keyed by returning a punt 52-yards for the go-ahead TD in the fourth quarter in a 27-10 win at Syracuse. It was Crowder’s third career punt return for a score and his first since 2013.Crowder finished the game with 170 all-purpose yards – one carry for six yards, nine receptions for 58 yards and six punt returns for 106 yards. With the 170 yards, he is now just the 11th player in ACC history with 5,000 or more all-purpose yards in a career.

UCLA linebacker / running back Myles Jack made his initial Honor Roll for this season by carrying the ball four times for 38 yards and one TD on offense; recording six tackles, including one for a loss of three yards on defense; and returning a punt six yards on special teams during UCLA’s 44-30 win at Washington. Jack scored his third rushing TD of the season late in the second quarter to give the Bruins a 28-10 lead. He now has five career TDs against the Huskies dating back to 2013. For the season, Jack has 115 all-purpose yards and is second on the team in tackles with 69. He has six tackles for a loss of 12 yards, six pass break-ups and two QB hits.

Washington linebacker / running back Shaq Thompson earned the Honor Roll for the fourth time by carrying the ball 16 times for 100 yards, catching four passes for 56 yards, and making four tackles in the Huskies’ loss to UCLA. Shaq recorded his second straight 100-yard plus rushing game and moved into the UW rushing lead with 456 net yards and 7.5 yards per carry. During the last three games, Thompson has rushed for 372 yards, a 124-yard per-game average. He has been a force on defense all season, scoring four TDs, three on fumble recoveries and one on an interception. Thompson also has 58 tackles, one tackle for a loss of seven yards, three forced fumbles and three pass break-ups.