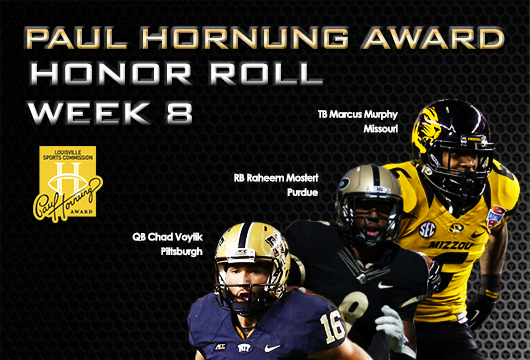 Louisville, KY – Monday, October 20, 2014 – A  pair of running backs who were also workhorses on special teams and a quarterback who passed, ran and caught while leading his team to a signature conference win were named to the Paul Hornung Award Honor Roll following week eight of the college football season. Running back Marcus Murphy of Missouri earned the Honor Roll for the second time while Purdue back Reheem Mostert and Pitt QB Chad Voytik earned the honor for the first time this season.

The announcement was made by the Louisville Sports Commission, owners and operators of the Paul Hornung Award, presented by Texas Roadhouse. The Award is given annually to the most versatile player in major college football. The winner and his family will be honored on January 27, 2015, at a banquet presented by KentuckyOne Health at the Galt House Hotel and Suites in downtown Louisville.

Missouri running back Marcus Murphy set the tone when he returned the opening kickoff 96 yards for a TD in the Tigers lopsided win over Florida in the Swamp. Murphy scored three different ways in Mizzou’s 42-13 win by adding a five-yard, first quarter rushing TD to extend the lead to 14-0, then added a 82-yard punt return for a TD after Florida’s opening possession of the third quarter. Murphy finished the game with 224 all-purpose yards and his 2,512 career all-purpose yards are tops for an active player in NCAA Division I.

Purdue running back Raheem Mostert touched the ball four different ways, racked up 274 all-purpose yards and a TD, was a gunner on punt coverage and covered kickoffs in the Boilermakers wild, 39-38 loss to Minnesota on the road. Mostert carried the ball five times for 115 yards, including a 42-yard second quarter TD dash and a 69-yard run in the third quarter to set up a TD. Mostert also returned six kickoffs for a 23-yard average, caught two passes and returned a punt in a game that was tied twice and saw the lead change hands three times.

Pittsburgh quarterback Chad Voytik demonstrated his versatility running, passing and receiving in the Panthers’ hard fought win over Virginia Tech 21-16 at Heinz Field. He was the game’s leading rusher with 118 yards on 19 carries (6.2 average); completed 10-17 passes for 92 yards, including 56-yard TD strike to open the scoring; and caught a 16-yard pass on a quarterback trailer. Voytik rushed for six first downs, and his 49-yard scamper to the Hokies’ 13-yardline in the fourth quarter set up Pitt’s game-winning TD on the next play. The win gave Pitt a 2-1 conference record and a tie for first in the ACC Coastal Division.