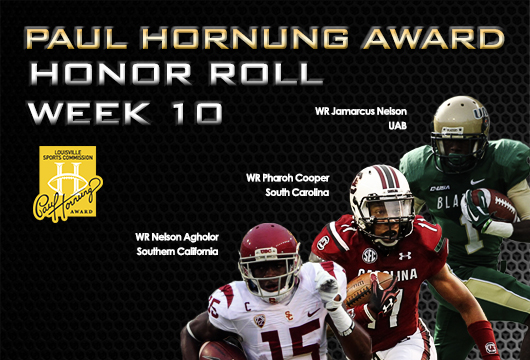 The announcement was made by the Louisville Sports Commission, owners and operators of the Paul Hornung Award, presented by Texas Roadhouse and given annually to the most versatile player in major college football. The winner and his family will be honored on January 27, 2015, at a banquet presented by KentuckyOne Health at the Galt House Hotel and Suites in downtown Louisville.

USC wide receiver Nelson Agholor accounted for 291 all-purpose yards, including an 87-yard TD reception and a 65-yard punt return for a TD in a 44-17 win at Washington State. His 220 receiving yards are a career-high, and Agholor now has four, career punt return TDs, setting a Trojan record. He is only the second FBS player in the last 10 seasons to tally at least 200 receiving yards and a punt return TD in the same game.

South Carolina wide receiver Pharoh Cooper had 256 all-purpose yards – the most for the Gamecocks this year – and accounted for four TDs in a heartbreaking 45-42 two-overtime loss to Tennessee in Columbia. Cooper ran for a TD in the first quarter, threw a TD pass in the second and had TD receptions in the third and fourth quarters. His 233 receiving yards are a single-game school record and his 11 receptions are a career-best. Cooper ran for 23 yards on three carries, threw a 30-yard TD pass and recovered a fourth-quarter onside kick by the Volunteers.

UAB wide receiver Jamarcus Nelson touched the ball four different ways and led UAB to a 31-28 win over Conference USA foe FAU. Nelson caught six passes for 125 yards a one TD, returned four punts for 50 yards, ran the ball once for six yards and returned a kickoff for 19 yards. Nelson registered his third 100-yard receiving game of the season and the 11th of his career. His 78-yard TD catch in the third quarter was 24th of his career and put UAB up 14-7. Of his 24 TDs, 17 of them have covered distances of 40 yards or more.