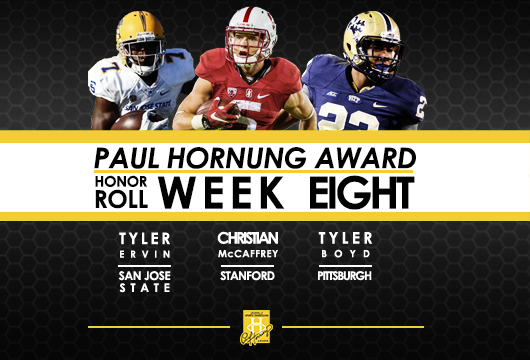 Pittsburgh wide receiver Tyler Boyd displayed his versatility in the Panthers’ 23-20 win over the Syracuse Orange by throwing a 38-yard completion, rushing six times for 34 yards, returning three kickoffs for 75 yards and posting a career-high 12 receptions for 93 yards. He completed a pass for the second consecutive game and is now 2-2 throwing the ball this year for 67 yards. Boyd is seventh in the ACC in all-purpose yards per game with 115.8, and he became the first player to record 20 yards passing, rushing and receiving in consecutive games since UTEP’s Lorne Sam in 2007. Pitt is atop the ACC Coastal division with a 4-0 conference record and a 6-1 overall record.

San Jose State running back Tyler Ervin accumulated 324 all-purpose yards in the Spartans’ 31-21 win over New Mexico. The bulk of his yardage came on the ground with 36 carries for 263 yards and one touchdown. His 71-yard touchdown run came on the second play of the game giving the Spartans an early 7-0 lead. Ervin also had two receptions for 11 yards and three kickoff returns for 50 yards. He has surpassed the 1,000-yard rushing threshold for the season and stands at 1,159 yards after eight games; he is second in the FBS in total all-purpose yards with 1,756. San Jose State is second in the Mountain West – West Division standings.