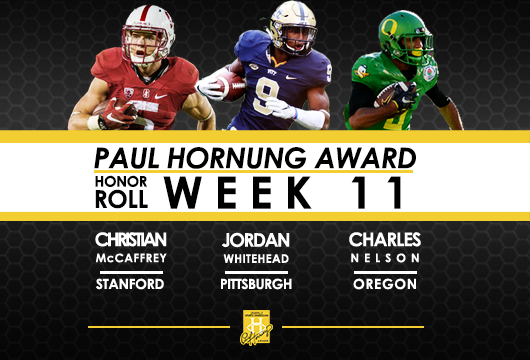 Michigan’s Jabrill Peppers is Recognized for Performances During Season

Stanford offensive back / return man Christian McCaffrey, who leads the nation in all-purpose yards, touched the ball a total of 44 times four different ways on offense and special teams in a tough loss to Oregon in Palo Alto.  McCaffrey’s 244 all-purpose yards mark his seventh 200+ yard game this season and his eighth consecutive 100-yard plus rushing game. He rushed 33 times for 147 yards and a touchdown, caught five passes for 42 yards, threw a pass, returned two kickoffs for 60 yards, returned one punt and fair caught two punts. He lined up at running back, Wildcat QB, slot and wide receiver.

Oregon wire receiver / kick returner / defensive back Charles Nelson put in another stellar effort playing defensive back, offense and kick returner in the Ducks’ huge road win over Stanford, 38-36. Nelson recorded four tackles from his safety spot, took a handoff in the backfield, turned the corner and blazed 75 yards down the sideline for a second quarter touchdown. He also returned three kickoffs for 59 yards. This marks the third consecutive week Nelson has been named to the Honor Role.

Pittsburgh safety / running back Jordan Whitehead again produced on both sides of the ball in the Panthers’ convincing 31-13 road win over ACC Coastal Division rival Duke. At safety, Whitehead recorded a team-high nine tackles, broke up a potential touchdown pass with a jarring hit in the end zone and snuffed out Duke’s final scoring threat with a fourth quarter interception at the seven yard line. At running back, he recorded 38 rushing yards on four carries, including an 18-yard jaunt to the Duke one-yard line that set up Pitt’s final touchdown.

Jabrill Peppers, Michigan. Safety / RB / Punt Return / KO Return. (Honored for body of work during the season) A three-way player who averages 80 snaps a game, Peppers has lined up at numerous different positions this season for the resurgent Wolverines. He started the year at safety then saw time at corner, nickel back and linebacker while handling punt and KO returns. A second year sophomore, Peppers made his offensive debut against Michigan State at wide receiver then had a breakout game in Michigan’s hard-fought, 29-23 road win against Minnesota: he logged 92 snaps while playing safety, receiver, wildcat QB, running back and return man; recorded four carries for 16 yards and a touchdown; returned a kickoff 43 yards and punt 41-yards that set up short touchdown drives; made three tackles and two PBUs. Peppers leads the team in punt and KO return yards, and is fifth in all-purpose yards, fifth in tackles and tackles for loss and second in PBUs.