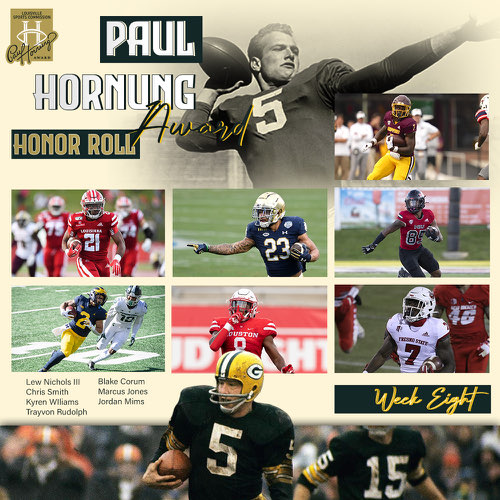 Louisville, Ky. – Oct. 25, 2021 –Seven players combined for 13 touchdowns three different ways on offense and seven tackles, an interception and a pass deflection on defense to earn the Paul Hornung Weekly Honor Roll in week eight of the college football season.

Michigan sophomore running back / return specialist Blake Corum touched the ball 24 times three different ways and scored twice as the unbeaten and no. 6-ranked Wolverines swamped Northwestern in Ann Arbor, 33-7. Corum’s one-yard touchdown run opened the scoring and his five-yard scoring run in the third quarter posted UM to a 17-7 lead. He carried the ball 19 times for 199 yards and four first downs, and caught four passes for 20 yards and a first down. Corum added one kickoff return.

Houston senior corner back / return specialist Marcus Jones handled four punts and two kickoffs, including a 98-yard return for a score, made seven tackles and deflected a pass in the Cougars’ 31-24, overtime win over East Carolina at home. In a game delayed five hours due to weather, Jones returned a kickoff 93 yards for a touchdown in the second quarter to erase a 10-3 ECU lead. He returned another kickoff 23 yards and returned two punts for no gain, fair caught a punt and returned another 11 yards.

Central Michigan freshman running back / all-purpose player Lew Nichols III touched the ball 30 times rushing, receiving and passing and scored twice as the Chippewas lost a heartbreaker at home to Northern Illinois, 39-38. Nichols opened the scoring with a 66-yard touchdown run, then added a one-yard scoring run late in the first quarter. He accounted 252 total yards and 10 first downs in the shootout – six rushing, four receiving and two passing.

Fresno State senior running back / return specialist Jordan Mims touched the ball 28 times three different ways and scored two different ways as the Bulldogs held off Nevada 34-32 at home. Mims carried the ball 23 times for 134 yards, caught four passes for 20 yards and handled one kickoff. He scored on a one-yard run in the first quarter and a seven-yard reception in the third quarter. Mims accounted for one first down receiving and five rushing, including two on the winning field goal drive.

Northern Illinois freshman wide receiver / return specialist Trayvon Rudolph touched the ball 10 times three different ways, scored two touchdowns and a two-point conversion as the Huskies overcame a 17-point deficit to win at Central Michigan, 39-38. Rudolph hauled in a 15-yard scoring pass late in the first half and caught a 75-yard bomb for a score in the third quarter. He caught two fourth down passes to convert first downs early in the game, then gained seven yards on a reverse on fourth and one on the winning field goal drive.

Louisiana sophomore running back / return specialist Chris Smith touched the ball 30 times for 319 all-purpose yards and two scores, including the game winner, as the Ragin Cajuns beat Arkansas State 28-27 on the road. Smith carried the ball 24 times for 238 yards, caught one pass and handled five kickoffs. He scored on a one-yard run late in the first half, then raced 80 yards for what proved to be the winning score with less than three minutes remaining. Smith accounted for 10 first downs rushing, two on the final drive to run out the clock.

Notre Dame sophomore running back / return specialist Kyren Williams touched the ball 32 times three different ways and scored twice as the Fighting Irish overcame cross country rival USC 31-16 in South Bend. Williams carried the ball 25 times for 135 yards and scored on a five-yard run late in the first half and on a one-yard run late in the third quarter. He caught four passes and fair caught one punt. Williams accounted for six first downs rushing and one first down receiving.