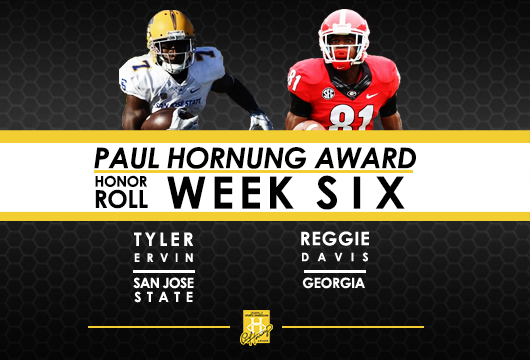 Louisville, KY – Monday, October 12, 2015 – Tyler Ervin (San Jose State) and Reggie Davis (Georgia) combined for 493 all-purpose yards and four touchdowns as each touched the ball three different ways on offense and special teams, exemplifying their versatility on the field to earn the Paul Hornung Award Honor Roll in week six of the season.

San Jose State running back Tyler Ervin led the Spartans’ with 249 all-purpose yards and scored the game’s final two touchdowns in a 33-27 overtime win at UNLV. He was on the receiving end of a 21-yard, fourth-down touchdown with 1:08 remaining that put San Jose State ahead 27-24; a UNLV field goal then sent the game into overtime tied at 27. When the Rebels failed to score on its OT possession, Ervin carried the ball four consecutive times and capped the 25-yard drive with a two-yard touchdown run to win the game. Ervin finished the game with 73 rushing yards and a touchdown, 74 receiving yards and a touchdown, one punt return and four kickoff returns for 100 yards. He currently leads the FBS in all-purpose yards per game with 231.17.

Georgia wide receiver Reggie Davis gained 244 all-purpose yards in a heartbreaking 38-31 loss to SEC East foe Tennessee at Knoxville. Davis returned a punt 70-yards for a touchdown that gave the Bulldogs a 24-3 lead late in the second quarter. He had three catches for 101 yards and a touchdown, including a 48-yard reception that tied the game at 31 early in the fourth quarter. David also retuned four kickoffs for 73 yards. He suffered a shoulder injury but returned to finish the game in what UGA Head Coach Mark Richt termed “a gritty performance.”