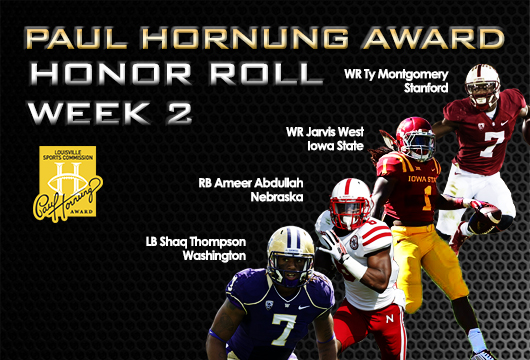 Nebraska running back Ameer Adbullah turned a short pass into a 58-yard touchdown with 20 seconds left on the clock to send Nebraska to 2-0 with a 31-24 win over McNeese State at Memorial Stadium on Saturday. Abdullah rushed 17 times for 54 yards and one touchdown. Abdullah also caught three passes for a career-high 96 yards and had one kickoff return for 34 yards. His 58-yard catch alone broke his previous single-game high of 50 yards against UCLA in 2013. With his 54 rushing yards, Abdullah increased his career rushing total to 3,263 rushing yards.

Iowa State wide receiver Jarvis West was the go-to player for the Cyclones in a 32-28 loss to Kansas State. West became the first college football player since University of Kentucky’s Randall Cobb in 2010 to have a passing, receiving and return touchdown in the same game. West finished with a career-high eight catches for 75 yards and a TD. He threw the ball once for 29 yards and a TD and his two punt returns were good for 93 yards and a TD. His 82-yard punt return in the second quarter was the longest punt return for ISU since 1962.

Washington linebacker Shaq Thompson made his first career appearance on offense a memorable one in the Huskies’ 59-52 win over Eastern Washington. After rushes of eight and one yard, Thompson broke off a 57-yard touchdown run to give the Huskies a 21-0 advantage. Thompson ended the game with 66 rushing yards on three carries and one touchdown. On the defensive side, Thompson had 14 tackles, including one tackle for a loss of seven yards and a sack for a loss of seven yards.

Stanford wide receiver Ty Montgomery lands on the Honor Roll for the second consecutive week after touching the ball four different ways in a 13-10 defeat to USC. Montgomery finished the game with 189 all-purpose yards: 69 yards on three kickoff returns, 44 yards on a punt return, 83 yards on nine receptions and a loss of seven yards on four rushes. With the 69 kickoff return yards, Montgomery becomes Stanford’s all-time leader in career kickoff return yards (2,133).