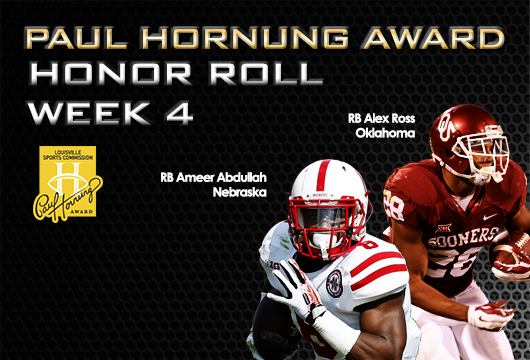 The Paul Hornung Award, presented by Texas Roadhouse, is awarded annually to the most versatile player in major college football. The winner and his family will be honored in January 2015 at a banquet presented by KentuckyOne Health at the Galt House Hotel and Suites in downtown Louisville.

Nebraska running back Ameer Abdullah carried the Huskers to a 41-31 win over the Miami Hurricanes in Lincoln, Neb., with the biggest all-purpose yardage total of his career. Abdullah was the dominating factor in the game with a career-high 313 all-purpose yards, including 229 rushing yards and two scores on a career-high 35 carries. He added a three-yard touchdown reception in the second quarter and 81 yards on four kickoff returns to finish the night as Nebraska’s career all-purpose yardage leader with 5,762 yards. Abdullah notched his second 200-yard rushing game of the season and his 313 all-purpose yards marked the second-best total in Husker history.

Oklahoma running back Alex Ross’ 206 all-purpose yards, including a 100-yard kickoff return for a touchdown, helped lead the Sooner’s charge to a 45-33 win over West Virginia in a Big 12 opener at Morgantown, W. Va. After the Mountaineers took a 24-17 lead late in the second quarter, Ross responded by returning the ensuing kickoff 100 yards for a touchdown. He finished the game with eight carries for 56 yards, three receptions for 19 yards and two kickoff returns for 131 yards. Ross’ 131 kick return yards rank seventh all-time for a single game in OU history and he becomes just the sixth player in OU history to record a 100-yard play.