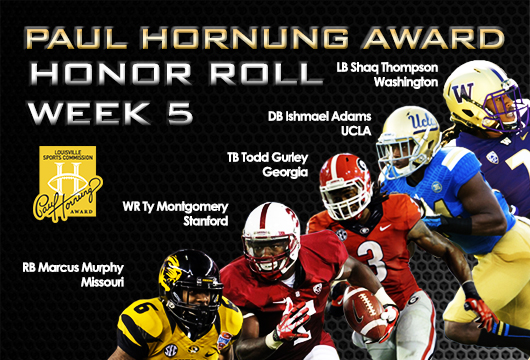 The Paul Hornung Award, presented by Texas Roadhouse, is awarded annually to the most versatile player in major college football. The winner and his family will be honored in January 2015 at a banquet presented by KentuckyOne Health at the Galt House Hotel and Suites in downtown Louisville.

UCLA defensive back Ishmael Adams earned his second Honor Roll when he returned a kickoff 100 yards for a touchdown and ran an interception 95 yards for another score, sparking UCLA’s 62-27 trouncing of Arizona State on Thursday night in Tempe. With ASU driving into the Red Zone, Adams intercepted Mike Bercovici’s pass and took it to the house with two seconds left in the first half, which put UCLA up 27-17 at halftime. Adams’ 95-yard interception return was his second for a score this season. He finished the game with 296 all-purpose yards, including 201 on kickoff returns, and had one tackle and one pass break-up on defense.

Georgia tailback Todd Gurley earned his second Honor Roll when he accounted for a career high 208 yards rushing and two TDs, 30 yards receiving and 47 yards on kickoff returns in a 35-32 SEC East victory against Tennessee between the hedges. Gurley’s 285 all-purpose yards rank third-best in school history in a single game and move him up to number two in career all-purpose yards with 3,961, trailing only Herschel Walker (5,749). Also, Gurley had his 16th game with at least 100 yards rushing, tying him with Garrison Hearst at number two in the school record books. Gurley now has 33 rushing touchdowns in his career and is tied for third on Georgia’s all-time list with Hearst.

Stanford wide receiver and return specialist Ty Montgomery earned his third Honor Roll when he accounted for 149 all-purpose yards and a TD in a 20-13 huge Pac-12 win on the road against Washington. The hard-nosed Montgomery summed up the hard-fought win in the second quarter when he caught a two-yard pass, steamrolled several Husky defenders down the sideline and backpedalled the final five yards for a 17-yard score. Earlier in the drive, he rushed for 15 yards as a wildcat QB and finished the game with three runs for 38 yards and two first downs. Montgomery opened the game with a 62-yard kickoff return that led to the game’s first score, a 35-yard Cardinal field goal.

Missouri running back Marcus Murphy earned his first Honor Roll with 188 all-purpose yards, touching the ball four different ways and setting up the winning touchdown as the Tigers defeated South Carolina 21-20 in Williams-Brice Stadium. Murphy had 98 yards rushing on 16 carries, caught two passes for 12 yards, returned three punts for 46 yards and one kickoff for 32 yards. His 98 rushing yards were a career-best and his 16 rushing attempts tied a career high. With Mizzou trailing 20-14 and the ball at South Carolina’s 24 yard-line with 4:40 left in the game, Murphy carried three times to the one-yard line. The Tigers scored a touchdown on the next play.

Washington linebacker Shaq Thompson earned his third Honor Roll as he continued his remarkable season playing multiple positions in a close Pac-12 division loss to Stanford, 20-13. Thompson tallied his fourth TD – two by fumbles recoveries, one by interception and one rushing – with less than four minutes to go before halftime. He stripped Stanford running back Reumond Wright of the ball, picked it up and rambled it 32 yards for the touchdown to tie the game at 13. The senior linebacker also forced a second half fumble, finished with seven tackles, one pass break-up and three carries on offense. A stalwart at linebacker for the Huskies, Thompson also played safety where he “tackled like a linebacker and covered like a defensive back,” said UW Head Coach Chris Peterson.