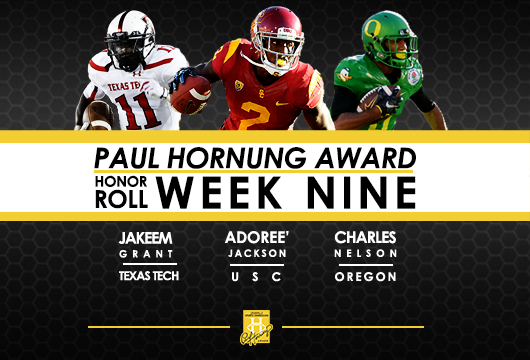 Texas Tech wide receiver Jakeem Grant touched the ball three different ways and recorded 323 all-purpose yards and two touchdowns in a 70-53 shootout loss to Oklahoma State. He caught 13 passes for 178 receiving yards and one touchdown, returned three kickoffs for a total 146 yards – including a blazing, 100-yard return for a touchdown, and added one punt return. Grant’s 323 all-purpose yards ranks fourth all-time in single game history at TTU and his kickoff return touchdown was the fourth of his career. Grant is currently fourth in the nation with 189.56 all-purpose yards per game.

USC cornerback, wide receiver and kick returner Adoree’ Jackson touched the ball four different ways, including an interception return for a touchdown in what proved to be the winning score in the Trojans’ hard-fought, 27-21 Pac-12 conference victory over California. Jackson caught two passes for 18 yards, returned one punt for nine yards, had one kickoff return for 31 yards and added two tackles on defense. Jackson picked off a pass from Cal QB Jared Goff and returned it 46 yards for a touchdown to put the Trojans up 24-7. Jackson has now scored touchdowns by way of interception, kick return and receiving this season.

Oregon wide receiver and safety Charles Nelson, who has been rotating back and forth between offense and defense for the Ducks in recent weeks this season, made big plays on special teams and defense in Oregon’s 61-55 triple overtime thriller at Arizona State. He played nearly 120 snaps against ASU and finished the game with 15 tackles and four kickoff returns for 185 yards and a touchdown. Late in the third quarter, Nelson returned a kickoff 100 yards to shorten ASU’s lead to 31-27. Nelson made his third appearance at safety for the Ducks and notched a game and career-high 15 tackles (14 solo).