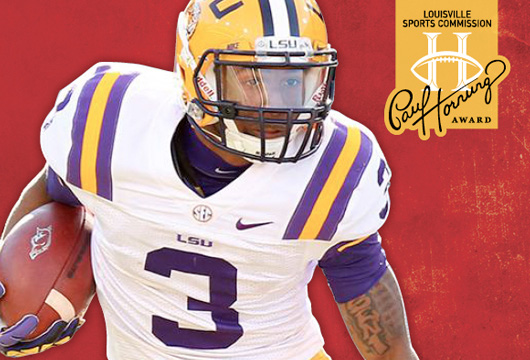 Beckham and his family will be honored on Jan. 28, 2014, at the annual Paul Hornung Award Banquet presented by KentuckyOne Health at the Galt House Hotel in downtown Louisville.

Beckham excelled throughout 2013 as one of college football’s most prolific all-purpose offensive and special teams players, ranking second in the nation and first in the Southeastern Conference with 2,222 all-purpose yards and 185.2 average yards per game. He was named first-team All-SEC by the league’s coaches as an all-purpose player.

“Odell Beckham, Jr. brings the entire package as a versatile football player,” said Gil Brandt, longtime NFL scouting guru and Paul Hornung Award Selection Committee member. “In my opinion, Beckham is the best college receiver in country and the best kick and punt returner in the country. He’s a devastating blocker and has the speed and size to make outstanding plays in tough situations, which he demonstrated on a consistent basis in the big games in the toughest league in the country. He’s also a quality individual with a terrific attitude and work ethic.”

During the 2013 regular season, Beckham caught 57 passes for 1,117 yards and eight touchdowns, returned 30 kicks for 806 yards, returned 14 punts for 141 yards and carried the ball five times for 58 yards. He was fourth in the SEC in punt return average, fifth in receptions per game, fourth in receiving yards per game and third in kick return average.

“It’s just an honor and a blessing to even be mentioned with the other guys who were up for the Hornung Award,” Beckham said. “I am proud to accept the award and thank the committee for recognizing me. It means a lot to me personally because I have worked extremely hard, long before this season started. I had great teammates help me along the way, especially on kickoff and punt returns. None of the opportunities to display my versatility would have been possible if it weren’t for my teammates and coaches who put me in a position to succeed.”

In perhaps the most impressive measure of his versatility and team spirit, Beckham played the role of Johnny Manziel on the scout team offense during LSU’s preparation for Texas A&M during an open week in the season. The Tiger defense held Manziel to less than 300 yards total offense and picked off two of his passes, by far his worst performance of the season, as LSU beat the Aggies 34-10.

“I love the way Odell Beckham plays the game,” Hornung said. “He can run, catch, block and return kicks and plays with great determination. And he has my admiration for lining up on the scout team during the season to help his defense get better. That’s how I played the game – doing anything I could to help my team win.”

In addition to his consistent play against SEC opponents, Beckham’s versatility was on full display in the first two games of the season against non-conference opponents where he amassed 603 all-purpose yards and scored four TDs. In the season opener, he led LSU to a 37-27 win over TCU in AT&T Stadium in Dallas with 272 all-purpose yards. Beckham carried the ball twice for 18 yards, caught five passes for 118 yards, and returned four kickoffs for 136 yards, averaging an astounding 34.0 yards per kickoff return. On Sept. 7 versus UAB, he recorded a season-high 331 all-purpose yards. He returned a missed field goal for a TD from nine yards deep in the end zone, caught five passes for 136 yards and three touchdowns, returned three punts and a kickoff for a combined 80 yards and carried the ball one time for 15 yards.

“I am excited for Odell to win this outstanding award,” said LSU Offensive Coordinator Cam Cameron. “He’s a tremendous representative of LSU and our football program, and we are thrilled to have him as a big part of our offense and returns teams. I have never been around a more versatile player, so this award is very fitting.”

Under the direction of head coach Les Miles, LSU finished the regular season 9-3 and 5-3 in the SEC, third in the SEC West. The regular season included a 14-point win over No. 2 Auburn and the blowout win over Texas A&M. LSU and Beckham close out their season in the Outback Bowl versus the Iowa Hawkeyes on Jan. 1 at 1 p.m. on ESPN.

Owen Marecic of Stanford, a two-way starter and All Pac-10 performer at fullback and linebacker, won the inaugural Paul Hornung Award in 2010; Brandon Boykin of Georgia won the award in 2011 after excelling on defense, offense and special teams; Tavon Austin of West Virginia won the award in 2012 as one of two players in the nation with more than 500 yards in three different categories (rushing, receiving and kick returns). Past winners and finalists have made their mark in the NFL, including Marecic (San Francisco 49ers), Boykin (Philadelphia Eagles), Austin (St. Louis Rams), Kentucky’s Randall Cobb (Green Bay Packers), Toledo’s Eric Page (Tampa Bay Buccaneers), Oregon’s LaMichael James (San Francisco 49ers) and TCU’s Jeremy Kerley (New York Jets).

Created by the Louisville Sports Commission in 2010, the Paul Hornung Award presented by Texas Roadhouse is given annually to the most versatile player in major college football. The Award is designed to promote college football and help preserve the legacy of one of Kentucky’s best-known and accomplished athletes who has always called Louisville home. Hornung, the 1956 Heisman Trophy winner at Notre Dame and NFL MVP for the Green Bay Packers, set a single season NFL scoring record that stood 46 years. Hornung is a member of the College and Pro Football Halls of Fame, and Vince Lombardi once called Hornung, “The most versatile man ever to play the game.” A national selection committee comprised of 16 sports journalists and former NFL stars votes for the Hornung Award, with fan voting powered by Texas Roadhouse comprising the 17th vote. All votes are tabulated independently by regional accounting firm Dean Dorton. The winner is honored at a banquet presented by KentuckyOne Health in late January in downtown Louisville. For more information, visit www.paulhornungaward.com Fans can also follow online on Twitter (@hornungaward) and Become a Fan on Facebook.