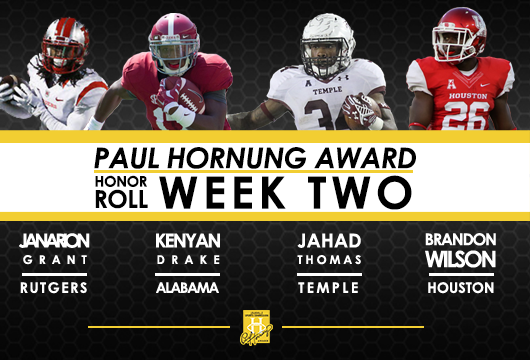 The Paul Hornung Award, presented by Texas Roadhouse, is awarded annually to the most versatile player in major college football. The winner and his family will be honored on February 25, 2016, at a banquet presented by KentuckyOne Health at the Galt House Hotel in downtown Louisville, KY.

Alabama running back Kenyan Drake kept the Tide’s offense rolling in a 37-10 victory over Middle Tennessee with 202 all-purpose yards, including career highs in yards and receptions. The senior back finished the day with five receptions for 91 yards and one receiving, six carries for 40 yards and three kickoff returns for 71 yards. Drake had long plays of 40-yards on a kickoff return and a 69-yard reception.

Rutgers wide receiver Janarion Grant set a school record with 337 all-purpose yards on Saturday in a 37-34 loss to Washington State. He touched the ball four different ways and racked up 195 kickoff return yards, 56 punt return yards, 65 receiving yards and 21 rushing yards. Grant scored twice in the fourth quarter on a spectacular punt return and kick return. He also became the first Rutgers player in the modern era to return and kickoff and punt for a touchdown in the same game. He now has three, career kickoff return touchdowns, including two this season.

Temple running back Jahad Thomas’ 342-all purpose yards set an American Athletic Conference record and contributed to the Owls’ 34-26 road win over division rival Cincinnati. Nursing a 10-6 halftime lead, Thomas helped Temple seize momentum by returning the second-half kickoff 100 yards for a touchdown; later that quarter he ran 56 yards from scrimmage for a touchdown to open the Owls’ advantage to 24-12. Thomas finished the game with a career-high 193 rushing yards and added 17 receiving yards and 132 kickoff return yards.

Houston cornerback Brandon Wilson had a huge game on defense and four kickoff returns for 148 yards, including a 100-yard touchdown return that tied the game at 17 in the third quarter, in a big win for the Cougars at Louisville, 34-31. Wilson fielded the kickoff three yards deep in the end zone, broke two tackles at the 10-yard line and accelerated past would-be tacklers. He added eight tackles and one pass breakup from the cornerback position. His kickoff return for a touchdown was the first of his career and the first for a Houston player since 2011.

The Louisville Sports Commission successfully launched the Paul Hornung Award in 2010 to honor its namesake and native son, and to recognize and reward high-level achievers in college football whose performances and contributions as versatile players often go unnoticed. Owen Marecic of Stanford, a two-way starter and All Pac-10 performer at fullback and linebacker, won the inaugural Paul Hornung Award in 2010; Brandon Boykin of Georgia won the award in 2011 after excelling on defense, offense and special teams; Tavon Austin of West Virginia won the award in 2012 as one of two players in the nation with more than 500 yards in three different categories (rushing, receiving and kick returns); Odell Beckham Jr. of LSU won the award in 2013 after finishing the season ranked second in the nation and first in the Southeastern Conference with 2,222 all-purpose yards and 185.2 average yards per game; and Shaq Thompson of Washington won the award in 2014 as a two-way player, earning first team All-America honors at linebacker and finishing as the Husky’s second-leading rusher at tailback. Thompson scored six touchdowns – two on offense and four on defense.