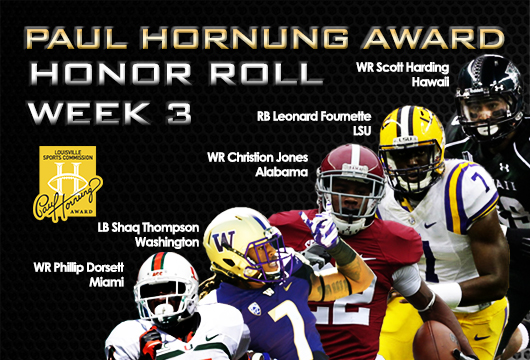 Louisville, KY – Monday, September 15, 2014 – Five major college football players, two from powerhouse SEC schools Alabama and LSU, and three from universities as geographically far flung as possible in the US – the University of Miami in Coral Gables, Fla.; the University of Washington in Seattle; and the University of Hawai’i Manoa in Honolulu – have been named to the Paul Hornung Award Honor Roll in week three of the regular season. Washington’s linebacker/running back Shaq Thompson, who earned the honor for the second consecutive week, represents the Pac-12; Phillip Dorsett of Miami represents the ACC; Scott Harding of Hawaii represents the Mountain West; and the Bayou Tigers’ Leonard Fournett and the Crimson Tide’s Christion Jones represent the SEC. All five helped lead their teams to victories this past weekend.

Miami wide receiver Phillip Dorsett had 201 receiving yards on only four catches – the first player to accomplish that at college football’s highest level since 1997 – and hauled in two touchdown passes for the second straight week, leading Miami past Arkansas State 41-20. He finished the game with the third-highest receiving yard total in Miami history and the second-most by any ACC player in a single game this season. Dorsett finished the game with 215 all-purpose yards and touched the ball four different ways. He had two punt returns for 27 yards, one carry from scrimmage and one punt return.

LSU running back Leonard Fournette led the Tigers’ rushing attack in its 31-0 shutout of Louisiana Monroe. He got the Tigers off to a fast start after returning the opening kickoff 40 yards. Fournette rushed 10 times for 52 yards, including a third-quarter touchdown run where he ran untouched for 24 yards. He finished the game with 112 all-purpose yards: 52 yards on 10 carries, one reception for 20 yards and one kickoff return for 40 yards. Fournette now leads the team with four rushes of 20 yards or more.

Hawaii wide receiver Scott Harding also had a major presence on special teams. He punted, returned punts and recovered an on-side kick in the Rainbows’ 27-24 win over Northern Iowa. Harding punted 11 times for an average of 38.7 yards with seven punts downed inside the 20-yard line, including one inside the 10. He also returned seven punts for 76 yards and caught one pass for 52 yards, which set up a Hawaii touchdown and a 17-7 lead midway through the second quarter. One of his fourth-quarter punts was recovered by UH, setting up a field goal and a 27-17 lead. Late in the game, Harding recovered UNI’s on-side kick after the Panthers closed to within 27-24.

Alabama wide receiver Christion Jones helped the Crimson Tide defeat Southern Mississippi 52-12 at Bryant-Denny Stadium. Jones had a game-leading 175 all-purpose yards with four catches for 50 yards, one punt return for 14 yards and four kickoff returns for 111 yards. Two short passes to Jones in the second quarter set up two touchdowns for the Crimson Tide and gave it a 21-3 lead over ULM. Through three games, Jones averages 129.7 all-purpose yards per game for the undefeated Tide.

Washington linebacker Shaq Thompson touched the ball four different ways on offense and defense to earn Honor Roll for a second consecutive week. On defense, Thompson returned an interception 36 yards for a touchdown, picked up a fumble and rumbled 52 yards for another score, and had four tackles as Washington routed Illinois 44-19 on Saturday at Husky Stadium. His two defensive TDs were part of a 28-2 scoring run by the Huskies. On offense, Thompson ran the ball three times for 16 yards. He became the first Washington player in 20 years to score via fumble and interception in the same game.