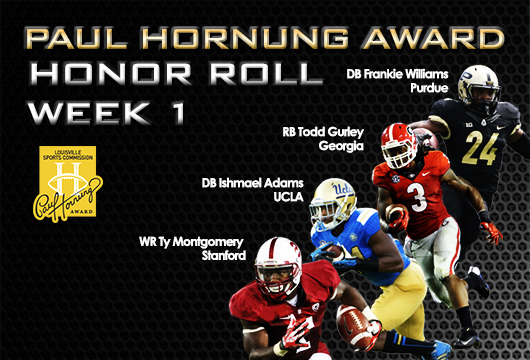 Louisville, KY – Tuesday, September 2, 2014 – Four players – two on offense and two on defense – who provided game-changing plays have been named to the Paul Hornung Award Weekly Honor Roll for the opening week of the 2014 season. The weekly recognition honors versatile, single-game performances around the nation by FBS student-athletes.

UCLA defensive back Ishmael Adams’ big plays on defense and special teams helped the Bruins slip by the Virginia Cavaliers 28-20 in Charlottesville. Adams finished the game with 98 all-purpose yards, including a 20-yard interception return for a touchdown in the second quarter to give UCLA a 7-0 lead that they would not lose. He also had three punt returns for 49 yards, two kickoff returns for 29 yards and four tackles.

Georgia running back Todd Gurley set a school record with 293 all-purpose yards and scored four touchdowns to help the Bulldogs down Clemson 45-21. He notched his 14th career 100-yard rushing game with a career-high 198 yards and three scores on just 15 carries, including a 51-yard touchdown on his final carry. Gurley also returned a kickoff 100 yards for a touchdown, his second career 100-yard return for a score.

Stanford wide receiver Ty Montgomery had 159 all-purpose yards and two touchdowns, including a 60-yard punt return, in a 45-0 win over UC Davis. He played just two quarters, and the punt return for a TD came on his first career punt return. Montgomery added one carry for eight yards from the Wildcat formation, five receptions for 77 yards and one touchdown, and two punt returns for 74 yards.

Purdue DB Frankie Williams set up three scores on defense and special teams and finished with 119 all-purpose yards in a 43-34 win over Western Michigan. Williams’ 56-yard interception return led to a second quarter TD, he added a 27-yard punt return that led to a field goal and a 36-yard return that led to an eight-yard touchdown in the third quarter. He finished the game with seven tackles, an interception and two pass breakups in crucial fourth quarter, fourth down situations.