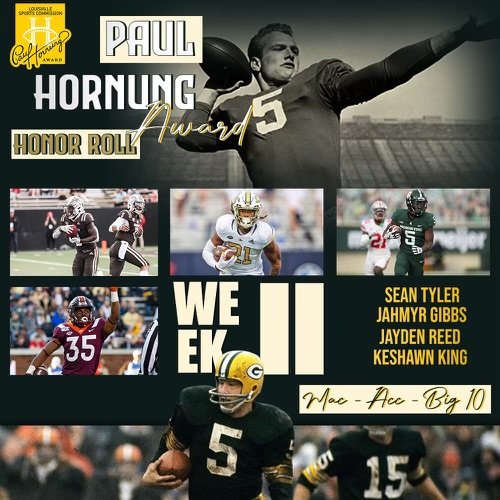 Georgia Tech freshman running back / return specialist Jahmyr Gibbs touched the ball 25 times three different ways and scored two different ways in the Ramblin’ Wreck’s 41-30 loss to Boston College. Gibbs returned a first quarter kickoff 98 yards to even the score at seven, then ran for a four-yard touchdown in the fourth quarter. He finished the game with 223 all-purpose yards rushing, receiving and returning kicks.

Virginia Tech sophomore running back / return specialist Keshawn King touched the ball rushing, receiving and returning kickoffs in the Hokies’ 48-17 home win over Duke. King scored on a 47-yard reception in the first quarter and a four-yard run in the fourth quarter. He carried the ball nine times for 90 yards, caught one pass and return two kickoffs.

Western Michigan sophomore running back / return specialist Sean Tyler touched the ball 21 times rushing, receiving and returning kickoffs for 288 all-purpose yards and each way as the Broncos outscored Akron at home, 45-40. Tyler carried the ball 16 times for 147 yards, including a two-yard touchdown run and seven carries for first downs. He caught a four-yard touchdown pass and returned a kickoff 96 yards for a score.