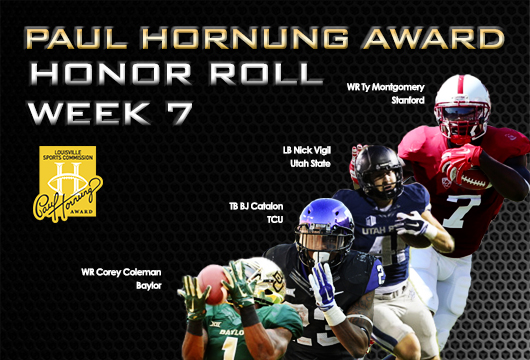 The announcement was made by the Louisville Sports Commission, owners and operators of the Paul Hornung Award, presented by Texas Roadhouse The Award is given annually to the most versatile player in major college football. The winner and his family will be honored on January 27, 2015 at a banquet presented by KentuckyOne Health at the Galt House Hotel and Suites in downtown Louisville.

College football fans nationwide have the opportunity to cast their votes online for the Paul Hornung Award. Fans can vote as often as once every 24 hours at paulhornungaward.com for players who were on the preseason watch list and players who have been named to the Weekly Honor Roll selection. Voting will continue through November 17, 2014. Fans will then have the chance to vote for thewinner from among the finalists in a second round of voting in late-November.

TCU tailback B.J. Catalon is on the Honor Roll for the second consecutive week after scoring three times and recording 213 all-purpose yards in a last-second loss at Baylor, 61-58. Catalon ran the ball 13 times for 48 yards and two touchdowns, caught two passes for 71 yards and returned a kickoff 94 yards for his third score of the game. Catalon’s kickoff return for a TD was the second of his career, and he is the first Horned Frog with two kickoff returns for scores since 2011.

Baylor wide receiver Corey Coleman caught a 25-yard TD pass to tie the game at 58 as the Bears erased a 21-point fourth quarter deficit and went on the beat TCU 61-58 in Waco. Coleman finished with a game-high 253 all-purpose yards as the Bears upped their record to 6-0. He had a career-high two TD catches, giving him four scoring receptions this season and six in his career. He also recording his second career 100-yard receiving game with 144 yards on eight catches. Coleman ran the ball three times for 22 yards and returned three kickoffs for 87 yards.

Stanford wide receiver and kick return specialist Ty Montgomery is on the Honor Roll for the fourth time this season after earning 206 tough all-purpose yards in Stanford’s 34-17 win versus Washington State. Montgomery totaled seven receptions for 72 yards, three punt returns for 63 yards and three kickoff returns for 71 yards. He had an over-the-shoulder TD catch called back due to penalty. Saturday’s game marked the 10th time Montgomery has recorded at least 100 all-purpose yards in his last 11 games.

Utah State linebacker Nick Vigil earned the Honor Roll for the second consecutive week while starting at running back and linebacker in the Aggies’ 34-16 win against Air Force. Virgil logged 97 snaps from scrimmage as he carried the ball five times for 10 yards and a TD; completed two passes for 13 yards; recorded 11 tackles, including one for a loss, and had one interception for 19 return yards. In a dizzying span near the close of the first half, he scored on a handoff from eight yards out, then came back on the ensuing possession with an interception that set up a 46-yard field goal, extending the Aggies’ lead to 24-6.