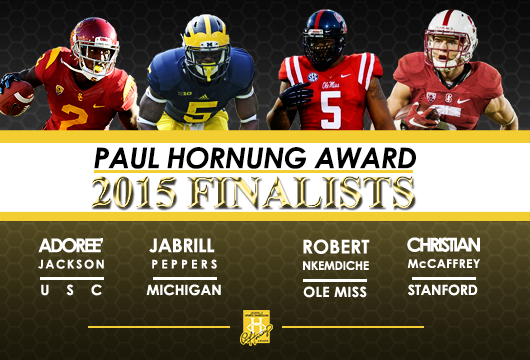 So far this season, three of the finalists who primarily play defense – Jackson, Peppers and Nkemdiche – have combined to play every position on that side of the ball. All four finalists combined have played every position in the offensive backfield and every receiver position, with McCaffrey playing every spot except tight end. McCaffrey, Peppers and Jackson also return punts and kicks.

The announcement was made today by the Louisville Sports Commission along with football legend and Louisville native Paul Hornung. The finalists were chosen by a 16-member national selection committee, with online fan voting counting for the 17th vote. Online voting that will account for the 17th vote for the winner opens today at paulhornungaward.com.  The 2015 Paul Hornung Award winner will be announced Friday, December 11.

The skills of the Paul Hornung Award finalists will be on display the remainder of the season as Michigan, Stanford, Southern Cal and Ole Miss all vie for spots in their conference championship games. Stanford, leaders in the Pac-12 North, closes out the conference schedule in the Big Game against Cal, then hosts Notre Dame to finish the regular season. Ole Miss faces LSU at home and Southern Cal visits Oregon this weekend, and Michigan hosts Ohio State in the Big House in the regular season finale. If Southern Cal and Stanford win their remaining conference games, the Trojans and Cardinal will meet in the Pac-12 Conference Championship game.

“There is a lot to like about this group of finalists for our award and I want to congratulate them,” Hornung said. “They look like a tough lot and have demonstrated a willingness to play any position on the field to help their teams win. That’s how I played the game.”

Nicknamed The Golden Boy, Hornung was a Heisman Trophy-winning quarterback at Notre Dame in 1956 and the NFL’s Most Valuable Player with the Green Bay Packers whose versatility earned him enshrinement in both the College and Professional Football Halls of Fame. At Notre Dame, Hornung played every position in the offensive backfield, handled punting and placekicking duties, returned kickoffs and started at safety on defense. He set an NFL single-season scoring record for the champion Green Bay Packers in 1961 that stood for 46 years.

Adoree’ Jackson, Southern California. Soph. 5-11, 185. CB/ WR/ KOR / PR. Jackson has blazing speed and is a triple-threat for the Trojans, playing big roles on offense, defense and special teams. Primarily a defensive back, he is second on the team in all-purpose yards with 109.4 and has scored three touchdowns this season – two on offense, one on defense. On offense, he has done the most damage as a wide receiver catching 24 passes for 382 yards and two touchdowns. He is the Trojans’ primary kickoff and punt returner, with 19 punt returns for 159 yards and 22 kickoff returns for 499 yards. On defense, Jackson has 19 total tackles, one forced fumble, two pass deflections and returned his only interception of the year 46 yards for a touchdown against California in a crucial 27-21 conference win. He is the only player nationally with at least 300 yards receiving, 400 yards in kickoff returns, 100 yards in punt returns and 10 tackles.

Christian McCaffrey, Stanford. Soph. 6-0, 201. RB / Slot / KOR / PR. McCaffrey leads the nation in all-purpose yards with 242 per game and has touched the ball 258 times. Primarily a tailback, he also plays slot, wildcat QB, wide receiver, handles punt / kickoff returns and threw a touchdown pass. Of the nine 300 all-purpose yards performances this season, three belong to McCaffrey. Seven times he has exceeded 200 all-purpose yards per game, and he has shown the ability to be a workhorse running back: carried the ball 25 times for a school record 263 yards and four touchdowns against UCLA, and already has set school records with eight consecutive 100-yard rushing games and 2,418 all-purpose yards on the season. McCaffrey is a solid receiver with 28 catches for 325 yards and two touchdowns. He is fearless fair catching the ball on punts and averages 28 yards per KO return. He is blessed with outstanding speed and great hands.

Robert Nkemdiche, Ole Miss. Jr. 6-4, 296. DL / RB / TE. A stalwart, active and often bruising defensive tackle, Nkemdiche earned the Paul Hornung Award Honor Roll twice early in the season by scoring three touchdowns at running back and tight end. He helped the Rebels to a hard-fought, 27-16 win over Vanderbilt with four tackles, including one for a loss, one QB hit on defense and a one-yard touchdown plunge on offense in what proved to be the winning score. Outstanding athlete who has recorded 22 tackles and 5.5 tackles for loss, 1.5 sacks sack, one pass break up, seven quarterback hurries and one blocked kick. Nkemdiche was a dominant defensive force against the highly touted Alabama offensive line in the Rebels’ 43-37 win over the Crimson Tide in Tuscaloosa. He is the first defensive lineman selected as a Paul Hornung Award finalist and is one of the top-rated college defensive linemen by NFL draft prognosticators.

Jabrill Peppers, Michigan. Soph. 6-1, 205. Safety / RB / PR / KOR. A three-way player, Peppers has lined up at 10 different positions this season for the resurgent Wolverines. He started the year at safety, saw time at corner, nickel back and linebacker while handling punt and KO returns. Peppers made his offensive debut against Michigan State at wide receiver then had a breakout game in Michigan’s hard fought, 29-23 road win against Minnesota: logged 92 snaps at safety, receiver, wildcat QB, running back and return man; recorded four carries for 16 yards and a touchdown; returned a KO 43 yards and a punt 41 yards that set up short touchdown drives; recorded three tackles and two PBUs. Peppers’ leads the team in punt and KO return yards, fifth in all-purpose yards, fifth in tackles and tackles for loss and second in PBUs.  He has played a total of 809 snaps so far this season, an average of more than 80 per game, with 635 snaps on defense, 150 on special teams and 24 on offense.

All votes for the Paul Hornung Award are independently tabulated by regional accounting firm Dean Dorton, one of the largest accounting and financial advisory firms in Kentucky, with offices in Louisville and Lexington. The winner and his family will be honored on February 25, 2016, at the annual Paul Hornung award Banquet presented by KentuckyOne Health at the Galt House Hotel in downtown Louisville. For tickets to the banquet contact Julie Howell at 502-587-6742 or JHowell@Louisvillesports.org