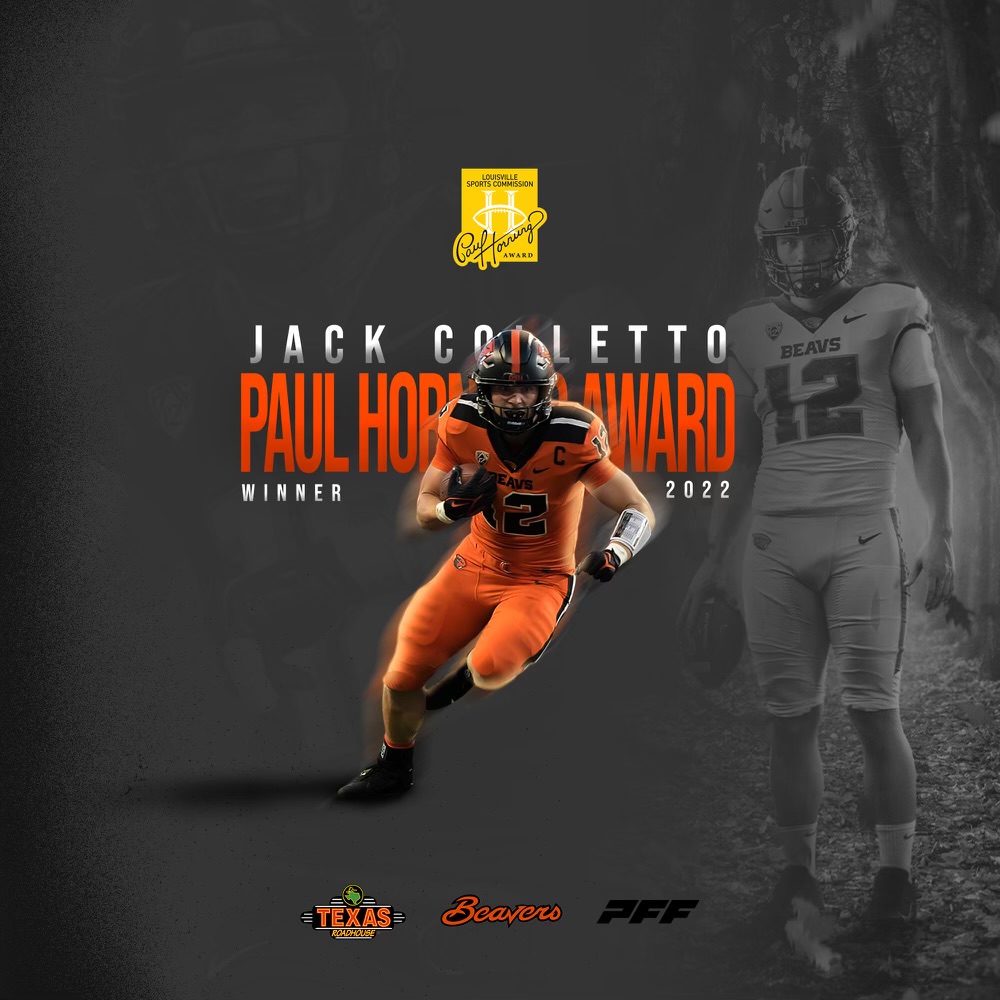 The announcement was made today by Karl F. Schmitt Jr., president and CEO of the Louisville Sports Commission, owner and operator of the Award. The Paul Hornung Award Selection Committee, comprised of 17 sports journalists and football experts from across the country, picked Colletto from among the four finalists who were announced on Nov. 10. An online vote powered by Texas Roadhouse accounted for the 18th vote.

Colletto and his family will be honored at the annual Paul Hornung Award ceremony on Mar. 13, 2023, at the Galt House Hotel in downtown Louisville. For tickets, contact Julie Howell at 502-587-6742 or JHowell@Louisvillesports.org.

Colletto, the 13th winner of the Paul Hornung Award and the fourth from the Pac-12, is a fifth-year senior with a degree in mechanical engineering who was named Academic All-District by the College Sports Communicators. On the field, the “Jackhammer” engineered the transition from part-time starting quarterback as a sophomore to a utility player who played nine different positions on offense and defense depending on the Beavers’ weekly game plan, and was a regular on all special teams.

“This is just an amazing feeling, not just for me but for the program,” Colletto said. “To put in all this work and be recognized for what I’ve been able to do, it’s truly something special. Of course, I couldn’t have done it without the support from a lot of people, especially those around the program and my immediate family. I appreciate all the help and support.”

On offense, Colletto played both wildcat and direct-snap quarterback in short-yardage situations, was a blocking fullback where he started several games and occasionally played H-back and slot. He is third on the team with six touchdowns and accounted for 10 first downs rushing, two passing and one receiving. Primarily a linebacker on defense, Colletto lined up at slot corner and in the box, recorded 23 tackles, caused a fumble and recovered a fumble. He played on all OSU special teams and averaged nearly 40 snaps per game for the season.

“I’d like to congratulate Jack on a well-deserved honor,” said Oregon State Head Coach Jonathan Smith. “He came to Oregon State as a quarterback and made the transition to linebacker and special teams while still being a big part of our offense. That versatility on offense, defense and special teams has been a big part of our success this season. I’m proud he has worn the Orange and Black since 2018 as he has been a great representative for this program and Beaver Nation.”

Colletto is the first FBS player since 2013 to record at least 10 tackles, catch at least one pass, throw for at least one completion and rush for at least one score in the same season. He helped the Beavers compile a 9-3 overall record and a 6-3 record in the Pac-12; was part of a wild, come-from-behind win over Oregon; and helped the team earn a spot in the SRS Distribution Las Vegas Bowl against the Florida Gators on Dec. 17.

Slowed by an injury late in the season, Colletto missed OSU’s win over Arizona State but came back the next week to make five tackles and carry the ball to the six-inch line to set up a score when the Beavers upended arch-rival Oregon 38-34 in Corvallis. Earlier in the season, he made the Paul Hornung Award Honor Roll when he recorded three tackles, recovered a fumble and scored a rushing touchdown in OSU’s victory over Boise State; he made the Honor Roll again when he scored twice on offense and made three tackles in a 35-32 road win over Fresno State.

All votes for the Paul Hornung Award are independently tabulated by regional accounting firm Dean Dorton, one of the largest accounting and financial advisory firms in Kentucky, with offices in Louisville and Lexington, Ky., and Raleigh, N.C.

The Louisville Sports Commission successfully launched the Paul Hornung Award in 2010 to honor its namesake and native son, who passed away in 2020, and to promote outstanding performances by versatile college football players who often go unnoticed.