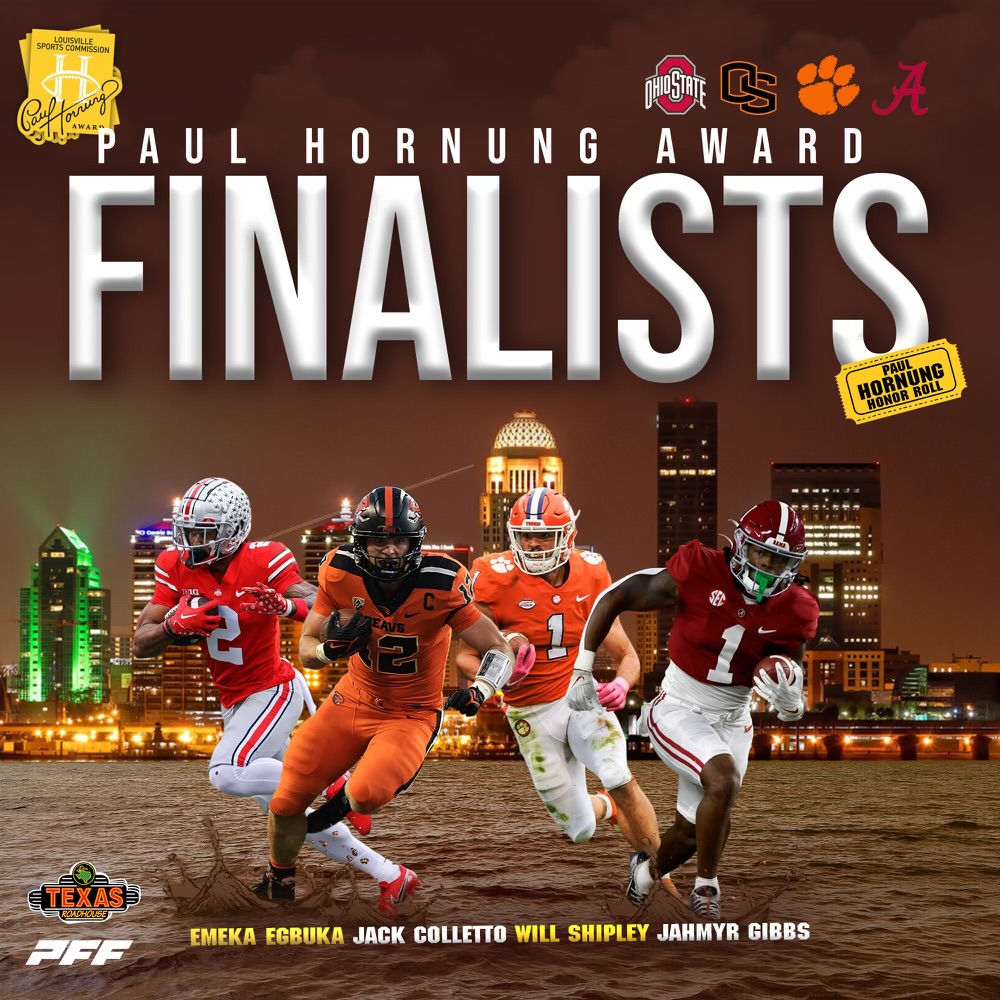 Award Presented by Texas Roadhouse, Given to Nation’s Most Versatile Player

The Paul Hornung Award presented by Texas Roadhouse, now in its 13th season, is given annually to the most versatile player in major college football by the Louisville Sports Commission. The Award pays tribute to the late football legend and Louisville native Paul Hornung. The winner and his family will be honored at the annual Paul Hornung Award dinner in downtown Louisville in March 2023. For dinner information, contact Julie Howell at 502-587-6742 or JHowell@Louisvillesports.org.

“Paul Hornung was a gamer, and he appreciated players who did whatever their coaches asked of them to help the team win, the way he played the game,” said Karl F. Schmitt Jr., LSC president and CEO.  “Hornung would be pleased with this year’s finalists.”

Nicknamed The Golden Boy, Hornung was a Heisman Trophy-winning quarterback at Notre Dame in 1956 and an NFL MVP with the Green Bay Packers whose versatility earned him enshrinement in both the College and Pro Football Halls of Fame. At Notre Dame, Hornung played every position in the offensive backfield, handled punting and placekicking duties, returned kickoffs, and started at safety on defense. At Green Bay, he played halfback, handled kicking duties, and set the NFL single-season scoring record in 12 games in 1961 that stood for 46 years.

The 17-person Paul Hornung Award National Selection Committee chose the 2022 finalists, with fans generating the 18th vote online. The 13th annual Paul Hornung Award winner will be chosen from among the finalists and announced on Dec. 7, 2022. Fan voting for the winner, powered by Texas Roadhouse, opens today and continues through Dec. 4 HERE and will again count as the 18th vote. Fans can vote once every 24 hours for their favorite from among the five finalists.

The Paul Hornung Award finalists represent the AAC, the Big 10, The Pac-12 and the SEC.

Jack Colletto, Oregon State senior fullback / quarterback / linebacker. Oregon State three-way player Jack Colletto averages 44 snaps per game, sees spot duty on defense and offense depending on the Beavers’ weekly game plan and is a regular on special teams. Colletto plays wildcat quarterback and occasionally takes direct-snaps at quarterback in short-yardage situations, starting three games and logging most of his time at fullback, and occasionally playing H-back and slot. He leads the team with six touchdowns and has accounted for 17 first downs rushing and one receiving. Primarily a linebacker, Colletto has lined up at defensive back and in the box has recorded 15 tackles, forced a fumble and recovered a fumble. He recorded three tackles, recovered a fumble and scored a rushing touchdown against Boise State and scored twice on offense and made three tackles against Fresno State.

Emeka Egbuka, Ohio State sophomore wide receiver / return specialist. Ohio State’s speedy wide receiver Emeka Egbuka also lines up at H-back and in the backfield on offense, is a regular handling punt returns, spot plays on kickoff returns and is a season-long member of the punt coverage team. He averages 60.5 snaps per game, leads the team and is 10th in the Big 10 with 108 all-purpose yards per game and has scored nine times on the season, twice rushing and seven times receiving. Egbuka has four games of 100+ yards receiving and made the Paul Hornung Award Weekly Honor Roll four times after wins over Notre Dame, Toledo, Michigan State and Iowa. He is fearless fair-catching punts at any location on the field (16 for the season) and averages 8.2 yards per return, second in the Big 10.

Jahmyr Gibbs, Alabama senior running back / return specialist. The Crimson Tide’s Jahmyr Gibbs is a workhorse running back who is also used extensively in the passing game and is a regular returning kickoffs. Gibbs averages 47 snaps per game and is ninth in the nation and third in the SEC with 144.4 all-purpose yards per game. He leads the team in scoring, rushing and receptions while ranking second in receiving yards. Gibbs touched the ball 20 times three different ways and scored once in a win over Texas, touched the ball 25 times three different ways in a win over Texas A&M and had a career day in the Tide’s shootout with Tennessee: played 74 snaps, touched the ball 32 times three different ways for 202 all-purpose yards, scored three touchdowns and accounted for 10 first downs.

Will Shipley, Clemson sophomore running back / return specialist. Clemson speedster Will Shipley carries the load for the Tigers at running back while also playing slot, wide receiver, H-back and returning kickoffs. Shipley averages 47 snaps per game, has four 100+ rushing games, averages 26.4 yards per kickoff return and is second in the ACC and 20th nationally in all-purpose yards per game with 131.4. He is one of two FBS players with 800 yards rushing, 150 yards receiving and 150 return yards. Shipley had a career-high 248 all-purpose yards versus Florida State, including a 69-yard kickoff return to open the second half that set up what proved to be the winning score; and he was Mr. Everything versus Syracuse: played 60 snaps, touched the ball 32 times three different ways for 242 all-purpose yards and two touchdowns, including a 50-yard scoring run that proved to be the game-winner.

Data in player bios was provided by Pro Football Focus, a company that has separated itself from the pack in its ability to provide game-changing NFL data supported by studying every player, on every play of every game. In 2014, it began to do so for college football, offering top services for professional and college programs. For more information, click HERE.

The Louisville Sports Commission successfully launched the Paul Hornung Award in 2010 to honor its namesake and native son, and to promote outstanding performances by versatile college football players who often go unnoticed. Each week during the regular season, a panel of college football experts selects players for the Paul Hornung Award Honor Roll based on performance. A national selection committee comprised of 17 sports journalists and former NFL stars votes for the Hornung Award finalists and the winner, with fan voting powered by Texas Roadhouse comprising the 18th vote.

All votes for the Paul Hornung Award are independently tabulated by regional accounting firm Dean Dorton, one of the largest accounting and financial advisory firms in Kentucky, with offices in Louisville and Lexington, Ky., and Raleigh, N.C.

The Louisville Sports Commission successfully launched the Paul Hornung Award in 2010 to honor its namesake and native son, and to promote outstanding performances by versatile college football players who often go unnoticed.